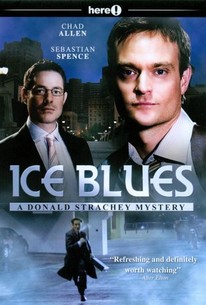 Alfonso Quijada
as Director
View All

There are no critic reviews yet for Ice Blues. Keep checking Rotten Tomatoes for updates!

Richard Stevenson's novels about Private Investigator, Donald Strachey, have been described as eye opening and ground breaking. They have launched a film series and there are even talks of a television series, but what makes these different than any other detective stories, Donald Strachey is gay. The whole point of the series is to show that despite his sexuality, Strachey is just the same as every other cop turned private investigator, he has the same problems, works the same cases, faces the same dangers, there is absolutely no difference. The first film in the series, Third Man Out, didn't capture that. The film series aired on the LGBTQ movie channel, Here!, and was so far over the top and full of gay everything, that I thought the series would die right there. Fortunately, they gave the series another shot, corrected the mistakes, and the second time around, filmmakers got it right. Ice Blues is much closer to Stevenson's novels and characters than the original film was. It starts when Strachey's long time partner, Tim Callahan (Sebastian Spence) receives a large campaign contribute from an anonymous man, who is murdered right in front of him. The police come to investigate, but find no proof, not even a body, so he hires his partner, Donald Strachey (Chad Allen), who doesn't know what to think. That all changes the next morning, when the body turns up, in the couples drive way, with a note attached to it. Chad Allen was so much better in this film than in the first. In the first movie he was a gay private investigator, in this film, he's a private investigator who happens to be gay. It's a part of the story but not the main focus of everything. Ice Blues is centered on the case itself, which is what a film should be focused on. The mystery was solid, the twist in the end was terrific, I would have liked to seen some more action and better casting, but overall a very solid film, especially for one that was made for TV.