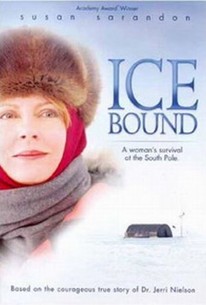 It is during the final months of 1999 that 46-year-old physician Jerri Nielsen (Susan Sarandon) finds herself stranded at the Amundsen-South Pole Research Station along with a tiny staff of researchers and technicians. Although, at first, there is little love lost between the somewhat aloof Nielsen and her more down-to-earth colleagues, a strong bond develops among them as the extreme Antarctic winter progresses. Nielsen, in particular, grows quite close to two of the "Polies": Big John Penny (Aidan Devine) and Claire Furinski (Cynthia Mace). It is Big John to whom Nielsen confides that she has discovered a lump in her breast, which, with the e-mailed assistance of her fellow physicians back in the States, she diagnoses as a cancerous growth. After a self-administered biopsy, Nielsen and her new friends construct a crude chemotherapy unit to treat her ever-growing cancer. Supplies are periodically air-dropped by the Air Force and both Big John and Claire are given a crash course in the treatment of Nielsen's affliction; but will she be able to survive her ordeal until the rescue party arrives? Inspired by a true story, as written by Nielsen herself in a best-selling autobiography, Ice Bound: A Woman's Survival at the South Pole was filmed on location near Ontario's frozen Lake Simone. This made-for-TV production originally aired April 20, 2003, on CBS.

Aaron Abrams
as Patient No. 2

Benz Antoine
as Morris
View All

Critic Reviews for Ice Bound: A Woman's Survival at the South Pole

If you want to be moved by a powerful story this weekend as opposed to gratuitously tickled, [Dr. Jerri] Nielsen is the heroine most deserving of your attentions.

Only a true story could be quite so remarkable, and Sarandon was an inspired choice to play the part.

There are no featured reviews for Ice Bound: A Woman's Survival at the South Pole at this time.

Ice Bound: A Woman's Survival at the South Pole Quotes