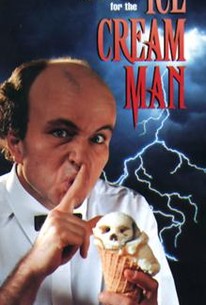 When you hear the happy jingle of the ice cream truck driving down your neighborhood street, lock your doors and pray to the Dairy Queen that the Ice Cream Man doesn't stop to bring you a cone -- because a soft-serve headache is nothing compared to the pain that this dairy demon will make you feel! As a child, Gregory Trudor (Clint Howard) suffered severe mental trauma when he witnessed the brutal murder of his best friend "The Ice Cream King." As an adult, all Gregory wanted was to take the place of the man he looked up to most, but the terror that haunts him drives a murderous bloodlust that can only be satiated by committing horrific acts of cold-blooded murder. The kids always used to come running when the familiar jingle of the Ice Cream Man's truck filled the neighborhood streets -- now they'll be running for their lives.

Brittania Paris
as Woman in Market

There are no critic reviews yet for Ice Cream Man. Keep checking Rotten Tomatoes for updates!

Awful mess of a horror film, one that had an interesting idea, but is squandered due to poor performances, lack of genuine scares and over the top execution. The thing with this film is that, this film really could have been a disturbing, memorable horror film, one that could have had genuine scares, ands truly frightening scenes. However, everything plays out for laughs, and the somewhat interesting idea just ends up being very stupid. The performances here are horrible, and this is standard low budget trash that never succeeds at being entertaining. Sure, it might entertain a few, but for genre fans looking for great horror, you sure won't find it. Ice Cream Man just lacks in terms of everything that makes horror such a good genre. Clint Howard is a good choice to play the character, but everything else is so underwhelming, and just not satisfying. If the Script would have been thought out more, then maybe this film would have had a chance. As it is, it's a train wreck, one that fails on its interesting premise of a psychotic ice cream vendor who terrorizes kids. This film just doesn't have what it takes to be a fun, entertaining and memorable horror film. Fans of cheesy low budget affairs will probably enjoy it, but for the rest, they may want to skip this one if they're looking for effective terror. Ice Cream Man really could have been a good film, unfortunately took the easy way out, and made everything more ridiculous, thus it lost any chance of being truly terrifying. Don't waste your time with this film; you'll be better off watching something else. Ice Cream Man is yet another genre film that wastes its potential on stupid visuals and over the top acting that it's laughable.

Cheesy as hell! I saw this movie a long time ago and I still remember the scenes. Once you've seen this movie you'll always think of Clint Howard as the creepy Ice Cream man. He is perfect for this part but this is a low budget movie so the quality isn't really there.

When you hear the happy jingle of the ice cream truck driving down your neighborhood street, lock your doors and pray to the Dairy Queen that the Ice Cream Man doesn't stop to bring you a cone -- because a soft-serve headache is nothing compared to the pain that this dairy demon will make you feel! The kids always used to come running when the familiar jingle of the Ice Cream Man's truck filled the neighborhood streets -- now they'll be running for their lives. Ice Cream Man tells the tale of a bunch of kids in suburban America, friends Johnny Spodak (Justin Isfeld), Heather Langley (Anndi McAfee), Chris 'Tuna' Cassera (Jojo Adams) & Small Paul (Mikey LeBeau) are just your average group of adolescent mates who enjoy messing around, having a laugh & buying ice cream from the ice cream man (Clint Howard) who drives around in his ice cream van. However Gregory is a new ice cream man & there's something not right about him, maybe it's the fact that he had huge syringe's of green goo injected into his head when he was younger as part of his 'treatment' in Wishing Wells mental hospital? Maybe it's the fact he kills dogs & puts them though a food crusher? Maybe it's because he drives around with various body parts, eyeballs & combat knives in the back of his van? Or maybe it has something to do with the disturbing fact he makes his ice cream of people he kills? It's up to detectives Gifford (Jan-Michael Vincent) & Maldwyn (LeeMajors II) to try & discover what's happening to all the missing people... Produced & directed by Paul Norman as Norman Apstein I though Ice Cream Man had potential that it didn't really live up to. The script by Sven Davison & David Dobkin has an intriguing premise, one that has that juxtaposition where ice cream men are considered good & deal with children all the time & this film turns the ice cream man into an evil killer. The film definitely does't take itself seriously & at times feels like a spoof, however the film-making is uneven & the horror, comedy & spoof elements seem almost random & don't gel that well. There are a few amusing moments in it like after having killed & used a local woman for ice cream ingredients Gregory finds a female condom in the bottom of his bowl, there are one or two gross moments in it like close-ups of people eating ice cream with eyeballs in but for the most part once I got over the initial premise I found it rather dull, pedestrian & boring. If it wasn't for the ice cream man turned killer gimmick this film would have nothing going for it, nothing at all. Some of the ice cream related one liners & twisted imagery paper over the cracks but underneath this is a poor film that runs out of ideas very quickly. The character's are alright, the kids weren't as annoying as I'd expected & while the parents are given some background & story to start with they are quickly forgotten & don't feature at all in the second half of the film. Director Norman, or should that be Apstein, judging by his IMDb profile is far more used to porn & has over 100 credited to him including being responsible for the Edward Penishands (1991) series, he also seems to have appeared in the classic British horror film Village of the Damned (1960) as one of the village children, amazing eh? The film has a reasonable level of competence & it has a few memorable scenes but there's nothing spectacular here. In case your wondering no children at all are killed in Ice Cream Man. Gore wise things are OK, there's various body parts & eyeballs, someone has a spike stuck through their chin & it exits from the top of their head & there's a few impressive decapitated heads including one in an over-sized ice cream cone... With a supposed budget of about $2,000,000 which is a fair amount Ice Cream Man is generally well made but nothing special, apparently it was sponsored by a shoe company & that it has a 'extraordinary number of shots of shoes', I must admit I can only remember one & the low level shots of peoples feet as Tuna hides under a shelf in the supermarket. Anyway, what difference does it make. The cast here is surprisingly good, Clint Howard, Jan-Michael Vincent, Olivia Hussey, David Warner, David Naughton & Lee Major's son! Unfortunately they aren't used that well & a potentially great cast is somewhat wasted. Ice Cream Man has an attention grabbing title & central premise that once you get past there is actually very little here to like or recommend, a valiant effort at something a bit different but it doesn't quite come off. ..