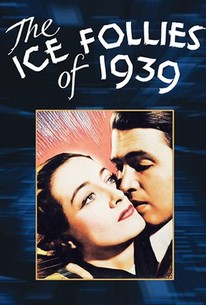 In this musical drama, a husband and wife endure marital strife when she signs a Hollywood film contract while he must remain in the East to work as a skater. Her career takes off, while his is on increasingly thin ice. The devoted wife offers to forsake her career for him. Fortunately, a kindly producer intervenes and helps the hubby get a job as a movie producer. The film includes a 17-minute fantasy finale in Techincolor performed by the International Ice follies. Songs include: "Loveland in the Wintertime," "Something's Gotta Happen Soon," "It's All So New to Me," "Cinderella Reel," and "Blackbirds."

Harrison Greene
as Agent
View All

Critic Reviews for Ice Follies of 1939

A lavish musical romantic comedy that skates on thin ice.

Audience Reviews for Ice Follies of 1939