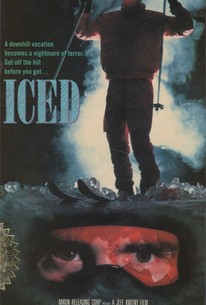 This plodding, amateurish horror film is basically a snow-capped variation on the standard stalk-and-slash killer formula. Six vacationers check into a posh ski resort where they are systematically slain, apparently in retribution for the accidental death of one of their friends years before. Despite a few inventive death scenes (by icicle, ski pole, snowplow, etc.), slasher-movie buffs looking for genre staples of bare nubile flesh, gushing gore and a high body count will be left out in the cold, as this is yet another late-80s exploitation thriller that contains no thrills (unless one counts the frequent ski footage) and hardly bothers to exploit anything.

Debra A. Deliso
as Tina

There are no critic reviews yet for Iced. Keep checking Rotten Tomatoes for updates!

There are no featured audience reviews yet. Click the link below to see what others say about Iced!