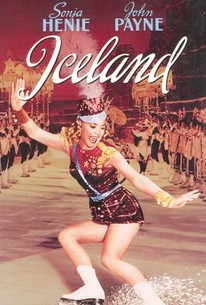 When the US marines land in Iceland during WW2, camp lothario John Payne wastes no time scoping out the local female population. He makes a casual pass at skating champ Sonja Henie, only to discover that she has taken his attentions as a marriage proposal! Unable to weasel out of his situation thanks to the rigidity of Icelandic customs, Payne conspires with his buddy Jack Oakie to discourage Henie from making any further wedding plans. By the film's 70-minute mark, of course, our hero is madly in love with our heroine and wants to skate down the aisle with her. Curiously, given the fact that there is plenty of natural ice in Iceland, most of Sonja Henie's musical numbers take place in a lavish Reykjavik nightclub. The tuneful Harry Warren-Mack Gordon musical score includes the popular "There Will Never Be Another You".

Sammy Kaye & Orchestra
as Themselves

Sammy Kaye
as With His Orchestra
View All

The movie has beautiful musical numbers and Sonja Henie demonstrates once again her exceptional skating abilities. [Full Review in Spanish]

An upbeat escapist wartime romantic/comedy musical that skates along thin ice and relies on the pixie charm and skating turns by Sonja Henie to stay upright.

There are no featured audience reviews yet. Click the link below to see what others say about Iceland (Katina)!