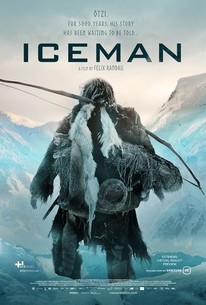 Critics Consensus: A prehistoric drama with the heart of a western, Iceman uses classic archetypes -- and deft direction -- to tell a stark and simple yet powerfully effective story.

Critics Consensus: A prehistoric drama with the heart of a western, Iceman uses classic archetypes -- and deft direction -- to tell a stark and simple yet powerfully effective story.

Critic Consensus: A prehistoric drama with the heart of a western, Iceman uses classic archetypes -- and deft direction -- to tell a stark and simple yet powerfully effective story.

The Ötztal Alps, more than 5300 years ago. A Neolithic clan has settled nearby a creek. It is their leader Kelab's responsibility to be the keeper of the group's holy shrine Tineka. While Kelab is hunting, the settlement is attacked. The members of the tribe are brutally murdered, amongst them Kelab's wife and son, only one newborn survives and Tineka is gone. Blinded by pain and fury, Kelab is out for one thing alone vengeance. He sets out after the murderers on what turns into a grand odyssey where he must fight constantly for the infant's survival; against the immense forces of nature; against hunters he encounters; and, amongst the loneliness of the quest, against a growing sense of doubt over the morality of his mission.

One can imagine Richard Harris or Charlton Heston in the role, but without any star power, Vogel does quite nicely.

"Iceman" is almost like something unearthed itself: a recognizable B western sharpened as much by its glints of psychology as by its kinetic savagery.

We can... easily follow the unsubtitled narrative. Less clear is why the German filmmaker Felix Randau would have the imaginative idea of reconstructing the possible final days of Europe's best-preserved mummy, only to give him such a basic plot.

The tone flits between revenge thriller and against-the-elements survival movie, but commits to neither.

It's a reasonably engaging movie, but based on very familiar filmic archetypes.

Wide mountain vistas and claims of painstaking authenticity fail to disguise the dopey genre underpinnings of this overfamiliar rape-and-revenge drama.

Too conventional to be of much interest.

A spectacular and very believable... adventure and survival film. [Full review in Spanish]

The underlying simplicity of ICEMAN is both a blessing and a hindrance. Felix Randau, however, does some stunning work. We may not understand the language, but we can feel every blow and chill and be captivated by the excellent visuals, words be damned.

A visually striking film about horrific acts, and while atypical in setting it's also a satisfyingly familiar tale of revenge.

The progression of the plot and the spectacular changing landscapes hold the interest, as does Randau's relentlessly inventive direction.

A striking combination of revenge drama and speculative archaeology.

There are no featured audience reviews yet. Click the link below to see what others say about Iceman!