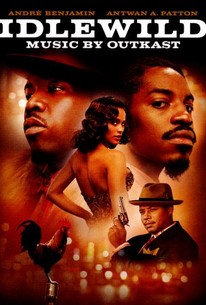 Critics Consensus: Idlewild has some truly breathtaking moments, but borrows too heavily from other similar movies, and the disjointed script is not worthy of talents involved.

Critics Consensus: Idlewild has some truly breathtaking moments, but borrows too heavily from other similar movies, and the disjointed script is not worthy of talents involved.

Critic Consensus: Idlewild has some truly breathtaking moments, but borrows too heavily from other similar movies, and the disjointed script is not worthy of talents involved.

OutKast duo André "Andre 3000" Benjamin and Antwan Andre "Big Boi" Patton star as two Prohibition-era performers determined to fend off the vicious gangsters currently attempting to gain a stake in the pair's lucrative club in this musical drama directed by longtime collaborator Bryan Barber and featuring choreography by three-time Tony award winner Hinton Battle. In the 1930s, Idlewild was the hottest speakeasy in the South thanks to the impressive showmanship of flamboyant manager/lead performer Rooster (Patton) and the notable talents of introverted pianist Percival (Benjamin). Everything changes, however, when a powerful gangster and his ruthless henchmen move in on the scene with every intention of landing a healthy portion of the club's considerable profits. Ving Rhames, Terrence Howard, Faizon Love, Patti LaBelle, Macy Gray, Ben Vereen, and Cicely Tyson co-star.

China Anderson
as Rooster's Daughter No. 1

Isis Faust
as Rooster's Daughter No. 2

Kyra Freeman
as Rooster's Daughter No. 3

Farnsworth Bentley
as Voice of the Flask

For a band whose music is suffused with such delicate irony, you'd expect at the very least for there to be a few laughs along the way? There are none. Nothing. Zero.

Fans happy to luxuriate in its artistic indulgence, however, will be swept up in the weird, random, fantastic OutKastness of it all.

You have to hand it to those OutKast fellas -- even when they make a mess, they do it with style.

You don't have to have a stylistic device in every single shot.

Shakespeare has been quoted many, many times over the past 400 or so years, but never to such empty purpose as in the inchoate, self-indulgent musical drama Idlewild

By jumbling genres, fashions, music and locales, and riddling bullets through much of it, Idlewild ends up feeling disjointed and disquieting.

Who ever thought I'd refer to an OutKast project as boring?

It's a tame, well-rehearsed story that hangs together to ensure Idlewild plays like one incongruous pop promo after another.

The only hope for saving the humorless Idlewild is the atmospheric speak-easy setting, the great dancing numbers and the chill soundtrack.

Benjamin and Patton have devised a basic Prohibition era gangster story as a background for their newest musical experiment melding modern hip-hop with the jazz and blues of the '30s, all put together with a great deal of visual cleverness and flair.

Its hodgepodge plot only heightens its stale smell

Though not as good as I hoped it would be, it's still an above par musical effort in the end...

See it. Chances are, you'll fall in love with Idlewild in spite of how many times you've seen this plot before. But that might be the Georgia boy in me talking...

This movie is beautiful. It's everything Chicago should have been: the music, the characters, the set design, the costumes, the script, the strange balance between tragedy, comedy and romance. This movie is really something special. Beautifully shot and the story is very well-crafted and tight. I love the surreality of the animation and the visual effects. Where was this during the Oscars?

This movie was okay. I think it couldn't make up it's mind about whether to be serious or funny. I mean who sings with Cuckoo clocks? And the talking rooster on the flask? Weird. But I loved the little animated people on the sheets of music.

This is an interesting blend of old time bootlegging and a concert video. The story is good and the acting is pretty spot on. If you really like Outkast you will dig this flick. For all you others it will entertain for a time.