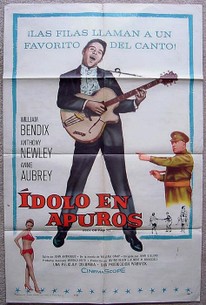 The otherwise routine story and themes of this comedy are greatly balanced by talents of Anthony Newley as Jeep Jackson, a singing idol called up to serve in the British army and Lionel Jeffries as Bertie, a fussbudget adjutant. One of Jackson's superior officers is the brash Sgt. Lush (William Bendix) whose bark is much worse than his bite. Aside from the usual army types, Caroline (Anne Aubrey), the commander's daughter, adds a romantic nuance to the story when she falls for Jackson. And as in any story about a pop singer anywhere, Jackson manages to belt out a few songs. ~ Eleanor Mannikka, Rovi

Ian Wilson
as Man in Cinema

Critic Reviews for Idol on Parade (Idle on Parade)

There are no critic reviews yet for Idol on Parade (Idle on Parade). Keep checking Rotten Tomatoes for updates!

There are no featured reviews for Idol on Parade (Idle on Parade) at this time.