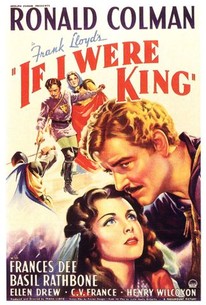 If I Were King recounts the legend of Francois Villon, previously filmed as The Beloved Rogue (1928) and musicalized on Broadway as +The Vagabond King. Ronald Colman plays Villon, renegade poet of France during the reign of King Louis XVI. The doddering, cackling Louis (marvelously portrayed by Basil Rathbone) secretly admires Villon, but can't abide the poet's irreverence and radical politics. Threatened with insurrection from the scheming Duke of Burgundy, Louis appoints Villon "king" for a day, hoping that the poet's popularity will enlist the support of the peasants. In the end, it is Villon's ragtag friends who save the city from toppling to Burgundy's forces. Supporting Ronald Colman in If I Were King are Frances Dee as the aristocrat whom Villon romances and Ellen Drew as the street girl who dies saving Villon's life.

Henry Wilcoxon
as Captain of the Watch

May Beatty
as Anna

Stanley King
as Captain of Archers

Russell Powell
as Ruffian
View All

Critic Reviews for If I Were King

Sharply written by Preston Sturges and well acted by Basil Rathbone, this commercially popular swashbuckler was nominated for four Oscars.

Colman is without peer in his portrayal of the famous French poet and ne'er-do-well Francois Villon.

Audience Reviews for If I Were King

If I Were King Quotes