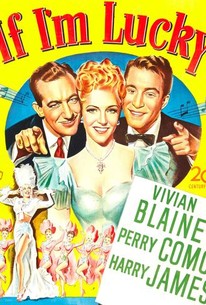 The second of Perry Como's two starring vehicles for 20th Century-Fox, If I'm Lucky is an easygoing remake of 1937's Thanks a Million. Como plays the old Dick Powell role as Allan Clark, an entertainer who is maneuvered into politics by conniving manager Wally (Phil Silvers, in the role originated by Fred Allen). It all begins when Clark, hired to appear at a political rally for bibulous gubernatorial candidate Magonnagie (Edgar Buchanan), wins the hearts of the voters. One thing leads to another, and before long Clark himself is on the way to the governor's chair. With a newly acquired set of scruples, the singer-politico publicly reveals that his backers are crooks, but wins the election all the same! Though the satirical edge of Thanks a Million is muted in the remake, the musical numbers by Perry Como and costar Vivian Blaine help to take up the slack.

H. James & Music
as Themselves

George Davis
as Waiter
View All

Critic Reviews for If I'm Lucky

There are no critic reviews yet for If I'm Lucky. Keep checking Rotten Tomatoes for updates!

Audience Reviews for If I'm Lucky

Silly but pleasant little Fox B trifle. A Carmen Miranda musical in B&W is an oddity but she is as full as sass as ever and her headgear is as always astounding. Perry Como sings well and is certainly attractive but he is missing that big screen charisma needed for major stardom, it's easy to see why he was a big hit on TV he possessed a very warm and friendly presence. And of course there is Harry James and his band providing the music.