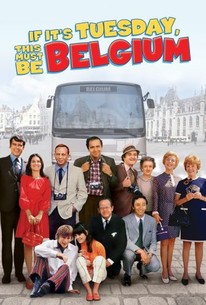 A mid-1960s TV documentary special (and a New Yorker cartoon before that) was the inspiration for If It's Tuesday, This Must Be Belgium. The film is a likeable satire of "packaged" European tours, where the nonplused tourists are expected to rush from one landmark to another in a breathless 18 days. Ian McShane stars as the amorous tour guide, with Suzanne Pleshette as the American department store buyer he falls for; their romance ends when Pleshette decides that the supposedly worldly McShane is too immature for her. An all-star cast, including Murray Hamilton, Peggy Cass, Pamela Britton, Marty Ingels, John Cassavetes and Vittorio De Sica, pops up in comic cameo roles. Our favorite bit: an American and German tourist, simultaneously regaling their respective wives with wildly divergent accounts of the same wartime confrontation. If It's Tuesday, This Must Be Belgium was reworked in 1987 as a made-for-TV movie, cleverly title If It's Tuesday, It Still Must be Belgium.

Elsa Martinelli
as Woman on Bridge

Joan Collins
as Girl on Sidewalk

Virna Lisi
as John's Beautiful Cousin in Rome
View All

Critic Reviews for If It's Tuesday, This Must Be Belgium

It all adds up to not much, maybe, except a pleasant way to spend an evening.

Falls well short of the flip promise of its title.

The cluelessness of Americans abroad and the inconvenience of roadrunner-paced vacations are both satirized in a gentle manner.

Audience Reviews for If It's Tuesday, This Must Be Belgium

This movie follows a busload of tourists rushing from city to city in Europe. The story is fine and I love the European scenery. One of the better vintage classics.

If its got Suzanne Pleshette it really doesn't need much more

If It's Tuesday, This Must Be Belgium Quotes