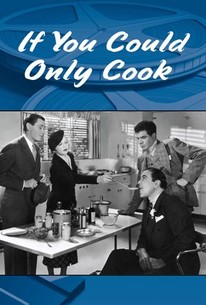 Jim Buchanan (Herbert Marshall) is a wealthy, highly successful automobile company president, who is about to enter into a marriage-of-convenience with a socially-connected young woman (Frieda Inescort). When his board of directors votes down a new, revolutionary line of cars that he wants to adopt, Jim walks out on his company and his social obligations to re-think his future. He meets Joan Hawthorne (Jean Arthur), an unemployed and homeless young woman, in the park; she doesn't recognize him, and mistakes his uncertainty for desperation similar to her own. Joan persuades him to pose as her husband so can apply as the cook and butler in the home of Mike Rossini (Leo Carrillo), who turns out to be a gangster laying low in the wake of Prohibition's end. Rossini loves Joan's cooking and tolerates Jim's butling; but his henchman Flash (Lionel Stander), who is suspicious of everyone, is puzzled by the fact that the couple don't seem to be living as husband and wife, and also by Jim's nocturnal wanderings back to his corporate offices. Still hiding his identity from Joan, he passes himself off as a frustrated engineer (which he is), and impresses her with his ideas and drawings. A case of mistaken identity and mis-directed good intentions briefly lands Joan in jail, while Jim keeps trying to sort out his attraction to her, versus the loveless marriage he's about to enter into. When all seems lost for Joan, Rossini -- who likes her and her cooking -- comes through with his boys, kidnapping Jim out of his own wedding to try to get the couple back together.

Richard Powell
as Chesty
View All

Critic Reviews for If You Could Only Cook

... fails to come together due to Seiter's flat, lifeless direction.

Audience Reviews for If You Could Only Cook

Sweet comedy with Herbert Marshall and Jean Arthur an unlikely but potent pair. It is light as air but a saucy souffle.

If You Could Only Cook Quotes