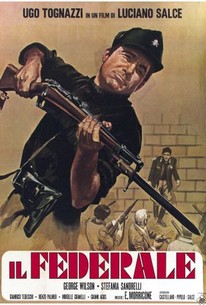 The Fascist (Il Federale) is a comedy set in 1944 Italy. Dedicated fascist Ugo Tognazzi is sent to capture anti-Mussolini professor Georges Wilson. He accomplishes his mission, but both captor and captive have a hard time getting home. After numerous comic misadventures in Tognazzi's motorcycle, the two men are caught in an air raid, the result being that both lose their clothing. Arriving in Rome, Tognazzi discovers that the city has fallen to the Allies--and now it is he, the fascist, who is in danger of capture and incarceration. Professor Wilson, who has grown fond of the essentially decent Tognazzi, rescues his ex-captor from an angry mob. Filmed in 1961, The Fascist was finally released in the US four years later.

Gianni Agus
as Head of the Cremona Fascists

There are no critic reviews yet for Il federale (The Fascist) (Operation Idiot). Keep checking Rotten Tomatoes for updates!

There are no featured reviews for Il federale (The Fascist) (Operation Idiot) at this time.