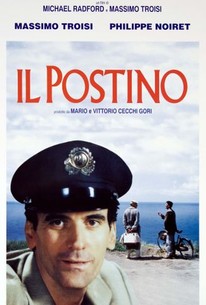 In this remake of the 1983 Ardiente Paciencia by Antonio Skarmeta, the time and place have been changed to Italy in the 1950s, but the relationship between the Chilean Nobel Prize-winning poet Pablo Neruda and Mario (Massimo Troisi), the postman who delivers his copious mail, is still the focus of attention. In this version of the story, scripted by a collective of Anna Pavignano, the director Michael Radford, Troisi himself, and a few others (based on Skarmeta's original story), Neruda is an aloof and slightly elitist figure who is seeking solitude on an island off the coast of Italy, taking a respite from political problems at home. Mario is a poet at heart and employs every measure he is capable of inventing to win his way into the affections and attention of the great author. As his efforts start to bear fruit and Neruda unbends and begins to share conversation and philosophy with Mario, the postman idolizes the poet all the more. Eventually, Neruda shares his leftist political philosophy as well -- and helps him win over the captivating Beatrice, the woman of Mario's dreams. When Neruda leaves, Mario enters into high gear as he prepares material for the next time he sees Neruda -- his ardor and patience, alluded to in the original title -- are essentially indestructible. (Massimo Troisi) was fated never to know that Il Postino would receive worldwide acclaim and be nominated for an Oscar for "Best Picture" in 1995 (the first foreign film nominated in that category since Ingmar Bergman's Cries and Whispers 22 years earlier). Suffering from a heart ailment and unable to work more than an hour or two on the filming of Il Postino each day, he died in his sleep at the age of 41, the day after shooting ended on the film. ~ Eleanor Mannikka, Rovi

This is a film with a heart and soul; a film keyed to the wonderful performance by actor and director Massimo Troisi.

The Postman (Il Postino) is slight, but it's tough to imagine anyone not liking it.

[The actors] make this good-hearted little film into a quiet meditation on fate, tact, and poetry.

I was captivated by the Massimo Troisi's performance as Mario.

Il Postino has been dismissed by some as a piece of sentimental whimsy. They are missing a lot, as the film is much deeper than its surface charm.

Troisi... has fine comic timing throughout, along with a touch of mulishness which keeps a lot (but not all) of the hovering sentimentality at bay.

Romance, gorgeous words, and the beauty of Italy.

One of the most romantic movies ever made.

A mildly charming fable, about an Italian postman who eins the heart of a local girl through the heartfelt poetry of a legendary port, the film became cause celebre when star Massimo Troisi died one day after the shoot was over.

Works on so many different levels--as a tribute to the power and beauty of poetry; as a tale of brotherhood; and as a charmingly quirky romance.

It's almost too sweet, and not subtle at all... but it's a perfect crowd pleaser, romantic and earnest, a film from a forgotten era of film-making. I kind of loved it.

The Postman is a beautiful fictional work that reveres words, metaphors, and inspiration. A solemn praise to poetry, grace, and simplicity. Treasured.

I watched this in my Spanish class once for some reason, it's in Italian, though. We also saw the play the film was based on. It's a good romance story, funny, sad, happy, everything a romance should be, I guess. Overall, this is a good movie, but the play is better.

a wonderful tale of a man with nothing but becomes something because of his interaction with the famed poet pablo neruda. many of the details about the life of neruda are true, but the story is very much fictional. its a bit bizarre really, a man marries an amazingly beautiful woman only to obsess over his bromance with a much older man, but there is something very beautiful about the story. the cinematography and dialogue were brilliant throughout, and the film was altogether touching and thoughtful.