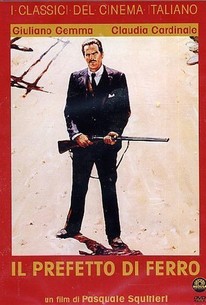 The mafia has overrun a section of the country so ruinously that a very stern man (Giuliano Gemma) has been sent by the government to be the governor in that region. He has been given wide-ranging power and authority and is not afraid to use it. Indeed, on occasion he finds it necessary to gun down a fleeing felon himself. As he closes in on the true extent of local corruption, and its connections elsewhere, he is promoted to a higher position in the fascist government so that the local mafia head can replace him as governor.

There are no critic reviews yet for Il prefetto di ferro (The Iron Prefect). Keep checking Rotten Tomatoes for updates!

There are no featured audience reviews yet. Click the link below to see what others say about Il prefetto di ferro (The Iron Prefect)!