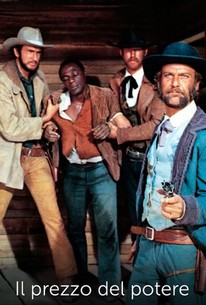 Italian director Tonino Valerii recreates a fistful of JFK conspiracy theories in Western settings with this bizarre look at the assassination of President James Garfield in 1890 Dallas. Granted, the assassination really occurred in Washington in 1881, but Valerii and screenwriter Massimo Patrizi don't let their allegory be ruined by facts. Anyway, it's a well-made film, with cinematography by Stelvio Massi and a suitably stentorian soundtrack by Luis Enrique Bacalov, but its appeal is probably limited to fans of Euro-oaters. Giuliano Gemma, Fernando Rey, and Van Johnson star, while genre enthusiasts will recognize veterans Frank Brana and Antonio Casas.

There are no critic reviews yet for Il Prezzo del potere (Texas) (The Price of Power). Keep checking Rotten Tomatoes for updates!

In post civil war America the President, (Van Johnson), travels to Dallas and is assassinated by corrupt officials and businessman interested in installing the vice President whom they can blackmail due to incriminating documents. A gunman (Guiliano Gemma) convinced that his black friend is wrongly accused of the assassination aims to uncover the truth. Tonino Valeri directed this fascinating, if flawed film which obviously is an allegory for the Kennedy assassination. The film may wrongly present blacks as slaves working on plantations in Texas but the film is nonetheless enjoyable and presents an interesting interpretation - that Kennedy's death was the result of a coup de tat- which many Americans could not accept at the time. Oswald's murder is replayed here as the black accused of the assassination is murdered by the men responsible, on route to Fort Worth prison. This moment in the film is more melodramatic than Oswald's death with his various escorts shot down before his over the top death scene. Nonetheless this is definitely one of the more interesting and worthwhile spaghetti westerns. Worth a look! 2 1/2 stars 4-18-14