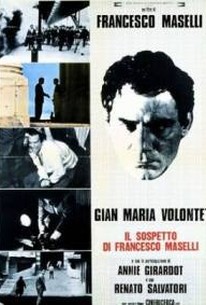 Political intrigues and infighting within the Italian Communist Party are the overriding themes of this drama. Emile (Gian Maria Volonte) has been sent to Turin by the Italian Communist Central Committee in Paris, ostensibly to find out which of the four Party representatives working in the Fiat is a spy. Previously, Emile had been ostracized because he had a too-heated argument with a member of the Party's Trotskyite faction. Restored to favor, he takes his assignment very seriously and has many searching interviews with each of the four. ~ Clarke Fountain, Rovi

There are no critic reviews yet for Il sospetto (The Suspect). Keep checking Rotten Tomatoes for updates!

There are no featured reviews for Il sospetto (The Suspect) at this time.