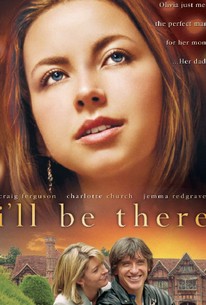 I'll Be There Photos

A has-been '80s pop star whose phone stopped ringing some time ago, Paul Kerr (Craig Ferguson) is an alcoholic on a downward spiral. After crashing his motorcycle through a window and into a fountain in his estate, Paul is sent to a mental hospital on the assumption that he has become suicidal. When a woman named Rebecca (Jemma Redgrave) shows up one day with teenage Olivia (Charlotte Church), whom she claims is Paul's long lost daughter, both the girl and the depressed singer slowly begin find a new sense of purpose in their lives. Returning to his home to set his life straight with a little help from a former bandmate, a tentative romance develops between Rebecca and Paul. Subsequently discovering that his newfound daughter shares her father's talent for singing, it appears as if Paul may well be on his way to finally finding post-fame happiness in life.

Critic Reviews for I'll Be There

In a story close to her real life, Charlotte Church has no great stretches to make and she handles lines and movement with the aplomb of the outstanding concert performer that she is.

An ill-advised vanity project that will do little to salvage its star's sullied reputation.

Hasn't a bloody laugh in it.

Little more than What a Banger Sister's Girl Wants Over the Still Crazy Cuckoo's Nest.

This movie is a light romp and a little different from your typical romantic comedy, because most of the relationship building is between the father and daughter.

Audience Reviews for I'll Be There

Ordinary but enjoyable comedy-drama with added attraction of Charlotte Church's beautiful rendition of Summertime near the film's end.

I'll Be There Quotes