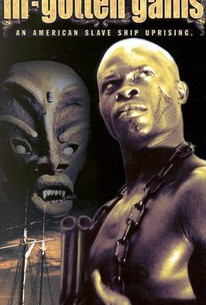 A kidnapped African fights for his life rather than allowing himself to be sold into slavery in this historical drama. In 1869, slavery is outlawed in America as well as most of the world, but that doesn't stop certain unscrupulous traders from trafficking in human beings to an underground market in the U.S. As the ship Argon Miss begins to enter British waters, 24 kidnapped African natives are held in chains below the decks, with another 60 soon to be delivered. As the captives ponder their fate, they are visited by an ancient spirit (voice of Eartha Kitt) that has been trapped within the planks used to build the ship. The spirit urges the slaves to escape to freedom while the African coastline is still within reach. One of the slaves, Fyah (Djimon Hounsou), is so moved that he breaks free from his shackles and leads his fellow captives in an effort to take over the ship and sail home. Blending an accurate historical recreation of period slave ships with dialogue that incorporates modern-day slang, Ill-Gotten Gains was shot on the same ship used in Steven Spielberg's drama about a slave uprising, Amistad, and features the same leading actor, Djimon Hounsou, though Ill-Gotten Gains was filmed several months before Spielberg's picture.

Eartha Kitt
as The Wood

Tony Torn
as The Vet

Lawrence C. McCoy
as Kroo One

Mark Much
as Ekundayo

There are no critic reviews yet for Ill Gotten Gains. Keep checking Rotten Tomatoes for updates!

There are no featured audience reviews yet. Click the link below to see what others say about Ill Gotten Gains!