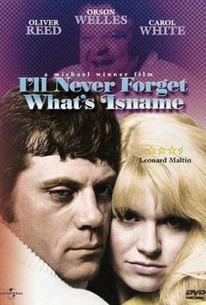 The imprisoning aspects of Success are humorously analyzed in this British-made film. Oliver Reed plays a wealthy advertising man who feels he has sold his soul and wishes to return to his happier earlier existence as a poor but swinging Londoner. Reed is goaded on by his boss, Orson Welles, who represents all the mercenary crassness that Reed despises. Handed a crucial commercial account, Reed plans to destroy himself by producing as offensive and confusing an ad campaign as possible. But Welles and the client are delighted by the "insult," and the disgruntled Reed is more successful than ever. Directed in the fragmentary "psychedelic" style typical of the late 1960s, I'll Never Forget What's'is Name gained notoriety upon its initial release by being the first mainstream British film in which the "F" word was spoken on-screen. ~ Hal Erickson, Rovi

Unfairly forgotten, "I'll Never Forget What's'isname" may be sabotaged by its awkward title -- which doesn't even have much connection to the script. Wouldn't you expect it to be a line of dialogue? Nope, try again. Oliver Reed is Andrew Quint, a ruggedly handsome ad executive who's brilliant at his job but disillusioned. He works for corrupt mogul Jonathan Lute, played by Orson Welles with his usual dazzling charisma. The story opens with Quint axing his desk to pieces and quitting his job. He returns to the struggling literary magazine which launched his career, hoping to regain his spiritual bearings. Naturally, the ruthless Lute scoffs at the move. At this initial stage, the film seems poised to be a dark satire of advertising and capitalism. But unfortunately, it strays too far into romantic issues during the second act, as Quint spars with his cynical wife and courts the miniskirted honeys who skip through his world. There's model-thin Carla, who has moved on. There's Josie (Marianne Faithfull at her sexy peak, sadly limited to just a few minutes of screen time). And there's his new co-worker, the virginal Georgina (Carol White). The latter seems his best bet for a new relationship if his wife carries out her divorce threats. Meanwhile, Lute schemes to put Quint back under his control. Along the way, Quint recalls his bullied youth, rendered in arty flashbacks distorted with tinting and jagged edits. Welles draws a couple of big laughs (his disgusted reaction to a bowl of barley flakes can not be missed). Faithfull shows some skin and calls Quint a "f*cking bastard" -- disputably, the first time that profanity was ever uttered in a mainstream film. And eventually, there's one of those fictional TV commercials that are so dependably fun to see. The story also turns much more dramatic than its early scenes would suggest. It's fascinating that this '60s-era protagonist has so much in common with "Mad Men"'s Don Draper, and the screenplay is written by someone named...Peter Draper. This can't be coincidence, can it? Matthew Weiner, drop me a line.

Another Swinging Sixties satire. Andrew Quint is a successful advertising agent juggling between his wife and his two mistresses until one day he decides that the high life is not for him and reacts by strolling through the streets of London with an axe and letting loss on his desk. Oliver Reed does a good job playing Andrew while an aging Orson Welles plays his annoying boss determined to keep him on just so he and his company can get an award. Carol White stars as Quint's new secretary and doomed mistress. Her acting is a bit ropey at times, but she does a pretty good job, whilst being easy on the eye in her fabulous sixties attire. I was excited by the fact that Marianne Faithfull plays one of Quint's mistresses till I found that she was only in three very short scenes. Still, in this film she did have the privilage of being the first person in a British film to say "fuck". Overall, not a bad film. I didn't find it as enjoyable as similar films but it was worth watching.