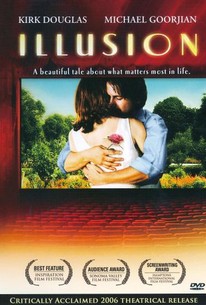 Director Michael A. Goorjian's Illusion tells the tale of a dying film director who, after leading a lavish life of fame and fortune, finds out too little too late what it truly means to live and be loved. Mr. Baines (Kirk Douglas) is a Hollywood icon who has agreed to grant one final interview before drifting into that good night. As Mr. Baines drifts wearily in and out of consciousness throughout the course of the interview, his long deceased editor returns to join him in going back over the footage of his life. While Mr. Baines never married, he did father an illegitimate son named Christopher (Goorjian) whom he abandoned as a child and never returned to. Now, on the screen before him, Mr. Baines watches mournfully as the tragic life of his long lost son plays out to its devastating conclusion. Upon viewing the heartbreaking footage Mr. Baines begins to realize that it was his own cowardice that ultimately fed his son's crippling sense of worthlessness and cemented the boy's grim fate. Despite Christopher's lifelong love of his childhood sweetheart Isabelle, an endless series of fateful mishaps constantly seemed to prevent the boy from finding true happiness with the ethereal beauty. As the film of Christopher's life careens towards tragedy time and again, the dying director implores his faithful editor to allow him the final cut that will save the picture. After living a lifetime of missed opportunities, the man who thought he had it all will now attempt to summon the dying might for one last opportunity to let his son know what it truly means to love, and be loved in return.

Michael A. Goorjian
as Christopher Baines

There's a sincerity to the filmmaking here that's at times quite touching: Illusion presents a portrait of true love that's as picture perfect as the sunny spring garden in which we see Isabelle.

Douglas does his best acting while watching and reacting to what he sees on screen. If this ends up being his cinematic swan song, it will not have been a bad way to go.

One of the worst dramas I have ever seen. In fact, this movie is so dramatically inept that I wanted to tear my eyeballs out.

Unavoidably, there are some sugary moments and clichés such as rain-soaked kisses and outlandish "artistic" stage performances, but [Illusion] keeps hold of that just-another-day-in-Hollywood feeling.

Several of its transitions are glaringly contrived, and its morality tale never quite comes together to be the shattering spiritual experience it wants to be.

It's a joy to see Kirk Douglas on screen again. That's not quite enough to make this...recommendable, but it's a reason you might want to take a look at it despite the flaws.

Filmmaking at its most sappy.

The unabashed melodrama of the flashbacks and present-day climax can't compete with the theatrical oomph provided by Douglas and Marasco...at the picture's spine.

Ironically, for a movie about the film business, Illusion is shot on grungy video and looks terrible.

You don't want to miss this little gem of a film.

There are no featured audience reviews yet. Click the link below to see what others say about Illusion!