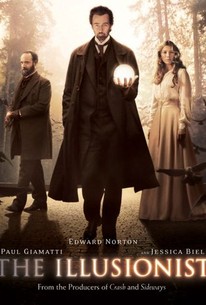 Critics Consensus: The Illusionist is an engrossing, well-crafted story of mystery, magic and intrigue that is certain to enchant, if not hypnotize, audiences.

Critics Consensus: The Illusionist is an engrossing, well-crafted story of mystery, magic and intrigue that is certain to enchant, if not hypnotize, audiences.

Critic Consensus: The Illusionist is an engrossing, well-crafted story of mystery, magic and intrigue that is certain to enchant, if not hypnotize, audiences.

Set in early 20th-century Vienna, a stage magician uses his magic to win back the great love of his life from a brutal enemy, her fiance, who is also the powerful crowned prince of Austria.

David O'Kelly
as Archduke No. 1

Richard Rowlands
as Archduke No. 2

John Early
as Man on Street

Jan Nemejovský
as Senior Officer No. 1

Ivo Novák
as Senior Officer No. 2

News & Interviews for The Illusionist

View All The Illusionist News

Critic Reviews for The Illusionist

So, in short? Well, the scenery is very pleasant and this film would kill a couple of hours on a plane. But I don't think I'd advise schlepping to the cinema rather than, say, staying at home for a nap then a bit of cheese.

The line between truth and illusion is blurred so persuasively that for a moment or two, you may even believe that a romantic costume drama could stand up to all those special-effects blockbusters in the dog days of summer.

Despite its two strong lead performances and terrific visual verve, The Illusionist ends up as a great example of an overly ambitious movie that's not quite sure what it wants to be.

Norton looks tortured and old before his time as the humourless Eisenheim.

In its unassuming way, the film shows that reality is more mystifying than illusion.

With exquisite performances (Giamatti's, in particular), it leaves you thrillingly hovering, happily uncommitted to any one interpretation.

The Illusionist is an attractively done piece of work, that leaves a relatively small impression.

The Illusionist is a deceptively simple yet magical cinematic experience.

The legerdemain of The Illusionist is done with more finesse...it is that feeling of elation that makes it magic.

I've always been a fan of Norton and he again delivers a very good performance. Sewell is pretty good as the adversary and Paul Giamatti has a nice role as an inspector trying to uncover Eisenheim's secrets.

For a good while, The Illusionist is topflight entertainment, but viewers who can't anticipate the big twist should dig out those old Encyclopedia Brown paperbacks and begin rebuilding their sleuthing skills from there.

A magical and engrossing experience where nothing is ever what it seems.

Audience Reviews for The Illusionist

Similar, but ultimately different from The Prestige, this is a moody and gorgeous romantic drama with magical overtones. Set near the end of the 19th Century in Vienna, this is a fictional tale based on a short story that inserts itself into some fictionalized retellings of actual events. Eisenheim is an illusionist who specializes in some acts that border on the supernatural. He captures the imagination, then ire of Crown Prince Leopold when he makes a move on Leopold's lady, the Duchess Sophie von Teschen- a woman whom Eisenheim tried to romance when they were younger, but was foiled due to her being of a far higher social standing. Eisenheim's renewed efforts also attract the attention of Leopold's chief inspector Uhl, but due to events I won't discuss here due to spoilers, he finds his loyalties shifting the more he investigates Eisenheim and his doings. Shot with a unique filter, this comes off like a relic from the past. It feels like an old-timey picture, and I friggin' loved that. It gives the film some unique sensibilities, and shows a great level of care and attention to detail. Yes, the film inserts fiction into actual events, but I didn't have much of a problem with it, and thought it worked quite nicely. Besides a great look, the film has excellent costumes and period details, and the score by Philip Glass is haunting and beautiful. The film is about magic, but it's more or less a classic story of star crossed lovers that uses magic as a plot device. I was fine with this. Yes, there are some typical trappings of films with this subject matter, but I never felt cheated, or lost. Edward Norton is great as Eisenheim, Paul Giamatti is fun as the obsessively determined Uhl, and Rufus Sewell is strong as Leopold. He kinda reminded me of Jude Law, too, which is cool. The only real weak link here is Jessica Biel as Sophie. Yes she's gorgeous, but while she's not totally awful, she seemed like she was acting in a school play, and it all felt kinda flat and lifeless. Her aside, this is a quite engaging and captivating film. Give it a look.

what if they made a twilight zone episode as long as a movie, and then didn't tell you that that's what it was...then you would have this movie: mysterious, romantic, childlike and wondrous. a not-too-chick-flick chick flick. cloaked in the velvet musical tapestry of Philip Glass, and the excellent performances of all involved.

Presto... Sucko! This was weird - a pretty bad movie with a half-decent ending. Ed Norton was flat and his accent was laughable. Paul Giamatti carried this flick but... alas.