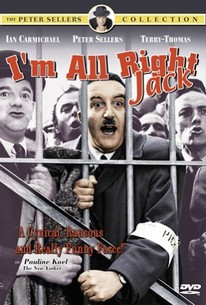 Set in a missile factory, the film focuses on Stanley Windrush, an upper-class graduate who innocently accepts a job at his uncle Bettram Purcel's factory. Unbeknownst to Stanley, his uncle has an agenda where he plans for his nephew to become the catalyst of a labour dispute, which his uncle hopes to profit from. Unfortunately for Bettram his plan backfires when his socialist employee Mr. Kite takes advantage of the opportunity for his own gain.

Brian Oulton
as Board Examiner

Basil Dignam
as Minister of Labor

The story is often wildly funny along the way...

It combines social satire with knockabout farce, not always successfully, but at least both are there and both are done crisply and with wit.

Successful comedy is based on love of life, successful satire on indignation: the Boultings succeed in revealing neither.

An intermediary work, one foot in Ealing gentility, the other in the abrasion of Anderson, Reisz, et al.

It's a mostly forgotten work today, despite its all right construction and the funny performance by a restrained Sellers.

...the Boulting brothers' acerbic satire I'm All Right Jack (1959) is a merciless and hilarious dagger thrown at both Labor and Management, two opposing factions each rotten with exclusive self-interest.

For me, this is the best film of all time. A superb cast of the UK's finest character actors and an A1 script. Peter Sellers was truly magnificent as the left wing union shop steward and Terry Thomas excelled in playing the two faced Personnel Manager. Among his classic comments are "The Management have behaved like absolute stinkers" when talking to the union and " They are a complete shower" when talking to Management about the unions. Another fine comment is when on being told that some bigwigs are visiting the factory, Terry Thomas replies "You better spruce the place up a bit, you know soap in the toilets, that sort of thing". I must have seen this film at least 20 times and I never grow tired of it. Great story, fine comedy and great acting. Never has a film handled the issue of industrial relations in such an amusing and pertinent manner.

Sharp but somewhat dated satire about unions, strikes and industry in 1950s Britain. The opening scene in the candy factory is a riot -- I wish the rest of the film were as funny. Favorite little details: Peter Sellers' purposeful walk and patsy Ian Carmichael's steady stream of "terribly sorry"/"frightfully sorry" apologies.