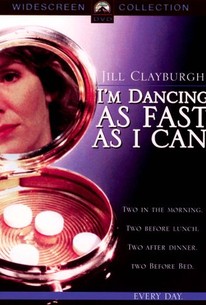 Jill Clayburgh plays, as one character calls her, "a pill-popping dingbat" in this film adaptation of television producer Barbara Gordon's autobiographical account of her addiction to prescription drugs. Clayburgh plays Gordon in the film as a successful television documentary filmmaker whose mounting pressures force her to pop a Valium or two for nerves. She then ingests a few more pills after an argument with boyfriend Derek Bauer (Nicol Williamson). And thus begins her slow and steady compulsion to keep taking more and more Valium. Finally realizing her addiction, Gordon makes a disastrous attempt to go cold turkey but fails miserably, finally having to undergo a painful rehabilitation in an institution.

Derwin Jordan
as Doctor
View All

Critic Reviews for I'm Dancing as Fast as I Can

Clayburgh has become the leading portrayer of the troubled modern woman, and once more she is totally persuasive. The trouble lies in the David Rabe script

If Clayburgh and Page don't come up with at least Academy Award nominations for their roles in I'm Dancing as Fast as I Can, there is no justice in Oscarland.

I'm Dancing as Fast as I Can hasn't exactly aged all that well. And that's me being kind.

Audience Reviews for I'm Dancing as Fast as I Can

There are no featured audience reviews yet. Click the link below to see what others say about I'm Dancing as Fast as I Can!

I'm Dancing as Fast as I Can Quotes