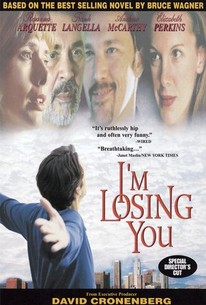 This 1998 film about a dysfunctional Los Angeles family is directed by Bruce Wagner, on whose novel this is based. Everyone in this family has a problem. Perry (Frank Langella) is a successful TV producer who has been diagnosed with inoperable cancer just before his 60th birthday. His son Bertie (Andrew McCarthy) is an unsuccessful actor but a wonderful father with an adorable daughter and an ex-wife who is known to show up for visitations visibly stoned. Rachel (Rosanna Arquette), a niece who is now his adopted daughter, finds out that her father murdered her mother years ago before taking his own life. We follow these characters as they go through their share of hardships and love. We are given a lot to chew on, including death, adultery, AIDS, and deceit. Wagner got a lot of very good actors to appear in small roles, including Amanda Donohoe, Buck Henry, Elizabeth Perkins, and Ed Begley Jr.. Prior to this film Wagner was chiefly known as the writer of Wild Palms and Scenes from the Class Struggle in Beverly Hills. ~ Brett Harrison, Rovi

Critic Reviews for I'm Losing You

A few flaws in his script keep the film from being a complete success.

There are no featured reviews for I'm Losing You at this time.