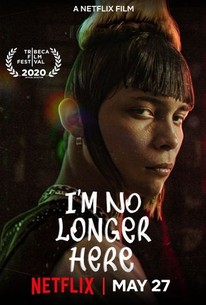 Critics Consensus: I'm No Longer Here's occasionally uneven narrative is more than offset by its honest and visually poetic approach to themes of identity and assimilation.

Critics Consensus: I'm No Longer Here's occasionally uneven narrative is more than offset by its honest and visually poetic approach to themes of identity and assimilation.

Critic Consensus: I'm No Longer Here's occasionally uneven narrative is more than offset by its honest and visually poetic approach to themes of identity and assimilation.

I'm No Longer Here (Ya no estoy aquí) Videos

I'm No Longer Here (Ya no estoy aquí) Photos

In the mountains of Monterrey, Mexico, a small street gang named "Los Terkos" spend their days listening to slowed down cumbia music and attending dance parties, showing off their outfits, hairstyles and gang alliances. These different bands of disaffected youth refer to themselves as Kolombianos, combining the Cholo culture with Colombian music. Ulises Samperio (17), the leader of Los Terkos, tries to protect his friends from the nefarious elements of a quickly evolving drug/political war, but after a misunderstanding with a local cartel, he is forced to leave for Jackson Heights, Queens, a diverse immigrant community in New York City. Ulises tries to assimilate, but when he learns that his gang and the whole Kolombia culture is under threat, he questions his place in America and longs to return home.

News & Interviews for I'm No Longer Here (Ya no estoy aquí)

View All I'm No Longer Here (Ya no estoy aquí) News

Critic Reviews for I'm No Longer Here (Ya no estoy aquí)

It's a deceptively dimensional portrayal, that of someone who worries his stage is getting smaller and smaller. And in Frias' magnetic feature is enough spirit, sound and artistry to give his journey a meaningful spotlight.

I'm No Longer Here stands as a welcome introduction to the many talents and passions of Fernando Frias.

Frias has smarts and style to burn; every shot has been composed with great poise and confidence, and he cranks everything up to get the most out of every moment. He's a guy who was clearly born to make movies.

It hypnotically washes over you, and I think that has a lot to do with the cinematography, music, and the lead performance by Juan Daniel Garcia Treviño.

The one quibble that I have with this film is the tentative romance... But when the film is in Mexico, it is really special.

Frías de la Parra proves himself a gifted visual storyteller, but he's also not one to handhold us through a narrative.

Identity, friendship and youthful passion make up this affecting drama out of Mexico.

While the immigrant story at the center of the film feels familiar, the director doesn't hold his punches when it comes to showing just how difficult the communication gap and a life without a passion could be for a young man.

[Frias] allowed Ulysses to be himself.

... bored in translation and discontent with the excessive dance scenes. Nevertheless, I still think there's something to be found here.

A defense and illustration of a joyously stimulating musical counterculture. [Full Review in Spanish]

There are no featured reviews for I'm No Longer Here (Ya no estoy aquí) at this time.

I'm No Longer Here (Ya no estoy aquí) Quotes