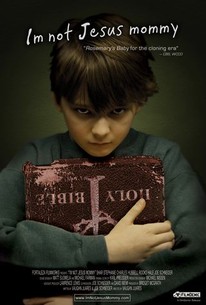 This unusual sci-fi thriller concerns Dr. Kimberly Gabriel (Bridget McGrath), a seemingly infertile young woman who will do virtually anything in her power to conceive a child. Through the miracle of modern science, she inherits a cloned son named David (Rocko Hale). For a time, all appears well, until David reaches his seventh birthday, and disasters suddenly begin to plague the earth -- disasters that seem to be emanating from the young boy himself. Dr. Roger Gibson (Charles Hubbell) turns up and admits a long-buried secret: the DNA used to clone David came from the Shroud of Turin -- meaning that the tyke just may be Jesus Christ recreated.

Juares is nothing if not ambitious, and he assembles the pieces of the puzzle with clarity (he also edited and photographed the film). But he bites off more than he can chew...

There are no featured audience reviews yet. Click the link below to see what others say about I'm Not Jesus Mommy!