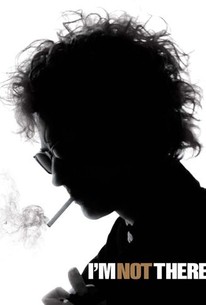 I'm Not There Photos

This re-enactment of the life of musician, Bob Dylan, features multiple actors embodying different stages in the singer's life.

Richard Gere
as Billy the Kid

Kris Kristofferson
as The Narrator
View All

News & Interviews for I'm Not There

Oren Moverman on Rampart and Directing Woody Harrelson
RT on DVD: I’m Not There is Here! Plus, News of the Blu-Ray Xbox 360 Rumors…
2008 Movie Extra FILMINK Awards

View All I'm Not There News

Critic Reviews for I'm Not There

Haynes is brilliant at tearing off the top of his own head and giving audiences a peek into his pop obsessions.

There are those who will applaud what Haynes and his actors have accomplished, and I can understand its appeal on an intellectual level. But I am not a supporter of film without form or art without structure.

It's brilliant, demanding, exasperating; it's undramatic but absorbing, more enigmatic than revealing, up itself and wildly inventive.

A crazy film which shouldn't work, but for most of the time does.

Not a lot of fun.

This works so well that long before the end you don't merely accept the use of these wildly diverse personae, but you may also even wonder whether Dylan's story could properly be told any other way

Haynes slices Dylan into six unequal pieces, and passes the roles out to six completely different performers. The two who steal the movie are in some ways a surprise.

Coming the same year as The Golden Age in which she played Elizabeth I, this proves Cate Blancheet's range and cements her reputation as the best of her generation.

Takes the genre in a different direction and features quality performances from Cate Blanchett, Christian Bale and Heath Ledger.

Captures Dylan's spirit - vibrantly, maddeningly and, above all, lovingly.

...not a biography by any conventional definition but an impressionistic survey of the artist, his art, his interaction (and at times collision) with the culture he both grabs onto and flees, and the mystery that still surrounds Dylan.

Since much of I'm Not There falls short in the lived moment, its individual threads don't lead back to Haynes's larger concerns.

Audience Reviews for I'm Not There

Taking literally from it's subject matter, that which refuses to be classified and boxed, this is sort of a biography of Bob Dylan, whoever that is, which is the point of the work. And so the lead is played by six, count 'em, six actors, all working to convey some indefinable aspect about the man who certainly could be said to be one of the foremost to have formed 60's counterculture music, and more. It's the most interesting biography I've ever seen, so much so that I, a devoted Dylan denier, decided to rethink my denials. Okay, so maybe he is a phony, but he's a real phony, or maybe not. Whoever the guy is, his music, his art, speaks for itself. Give it a watch.

For my money, this is one of the best biopics ever made, perhaps particularly because its goal was to not make a butterfly pinned to the wall of its subject. Ever the chameleon, Dylan is portrayed here as six different characters that reflect an aspect of his persona, and all of their stories are brought to plausible endings, beyond what Dylan did with these identities, of course, because he never carried one persona from beginning to end. That the director, Todd Haynes, approaches his subject in this manner is in a way brilliant, especially in the scenes in which the Cate Blanchett-portrayed Jude refused to let the BBC reporter call him (her?) anything in the interview, repeatedly worming away from any attempt to pin him down. Blanchett might have been my favourite of the six - and Gere the least, I thought his storyline was extraneous - but overall, this is a brilliantly conceived, unorthodox biopic, and by making itself aware of the limits of its genre, it has perhaps transcended it. High art, in my mind, one of the sharper films made in recent years, and one that exposes all the best and worst and most challenging points of the biographical film. Loved it.

I'm Not There Quotes