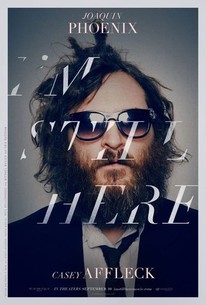 Critics Consensus: As unkempt and inscrutable as Joaquin Phoenix himself, I'm Still Here raises some interesting questions about its subject, as well as the nature of celebrity, but it fails to answer many of them convincingly.

Critics Consensus: As unkempt and inscrutable as Joaquin Phoenix himself, I'm Still Here raises some interesting questions about its subject, as well as the nature of celebrity, but it fails to answer many of them convincingly.

Critic Consensus: As unkempt and inscrutable as Joaquin Phoenix himself, I'm Still Here raises some interesting questions about its subject, as well as the nature of celebrity, but it fails to answer many of them convincingly.

Oscar-nominated Walk the Line star Joaquin Phoenix announces that he's retiring from acting to launch a hip-hop career as his brother-in-law Casey Affleck captures the curious transition on camera in the film some are labeling an elaborate Andy Kaufman-style prank. In the fall of 2008, Phoenix shocked his fans with the announcement that he would no longer be appearing in features, but instead trying his hand in the music business. In the wake of a particularly bizarre appearance on the Late Show with David Letterman, everyone began to wonder if the eccentric actor had finally fallen off the deep end. In this film, Affleck follows Phoenix as he attempts to convince Sean "Diddy" Combs to produce his debut album, and responds to a request by Ben Stiller to appear in director Noah Baumbach's Greenberg with casual indifference. ~ Jason Buchanan, Rovi

This movie has to be seen to be simultaneously believed and disbelieved.

A clever stunt that shrewdly wrestles with issues of fame, truth and self.

Casy Affleck is trying to claim that I'm Still Here is 'gonzo film-making'. And I'm right with him on that point. It DOES look like it was made by a muppet.

Affleck's meta-satire riffs amusingly on celebrity culture without hitting too many faux-doc highs.

No doubt what we witness is a performance for the camera, but with what motivation? Or is the hoax a hoax?

As a silly, throwaway comedy it works fine. But a missed opportunity none-the-less...

Rumor has it that Casey Affleck went broke making this film. Good, at least he won't be self-financing anymore films.

It is interesting because we come into that appearance with "context," giving it more gravitas than if we are just tuning in at night. But since that gravitas is most probably a put-on, it gives the whole thing a new dimension.

This comic portrait of Phoenix's lost year ironically manages to raise some serious questions about fame and the media obsession with celebrity.

I'm Still Here is incredibly self indulgent and pointless. As a piece it is not funny, and simply put, it's just painful to watch and offers very little.

Will Chadwick
We Got This Covered
View All Critic Reviews (132)

A prank void of any substance, I'm Still Here manages to be nothing more than a Borat imitation with flawed artistic pretenses.

In 2008, Joaquin Phoenix announces that he's quitting acting to pursue a music career in hip hop. His bother-in-law, Casey Affleck, decides to film his every move over the course of a year and delivers a portrait of an artist at a crossroads in his life. Beginning with home video footage from 1981 in Panama, of a young Phoenix jumping from a waterfall, this films sets it's stall out in exploring a life that's seemingly always been documented. Phoenix has been in the public-eye from a very tender age, having appeared as young as 8 yrs old in the television series "Seven Brides for Seven Brothers" before moving onto "The Fall Guy", "Hill Street Blues" and "Murder She Wrote". His first recognisable movie roles came in the shape of 1986's "Space Camp" or 1989's "Parenthood" before moving into more edgier roles in Gus Van Sant's "To Die For" in 1995. Up until then, he was better known as the younger sibling of (the late) River Phoenix but eventually gained the full respect of movie goers with two Oscar nominations (now three, since the release of this movie). It's was through this steady rise in the film industry that brought so much media attention to his, seemingly, self destructive decision to abandon acting and become a rap artist under the guidance of Sean "P. Diddy" Combs. This fly-on-the wall documentary follows Phoenix's obvious lack of talent for rapping and the abandonment of his personal hygiene, while his fragile mental state increased due to a voracious appetite for cannabis and cocaine. As he's constantly high and stoned, a frenzied media where clambering for his story and a reason for the meltdown of an actor in the prime of his career. Ultimately, though, the joke was on them (and us), as the whole thing was an elaborate hoax and an exposÃ© of the nature of celebrity and their pandered ego's and lifestyle's. Phoenix is entirely believable in his bearded, paunched appearance and his spiralling egotistical, mental anguish and arrogance. He even dares to tackle chat-show host David Letterman (in a now infamous episode) and when you consider that this was a role that completely consumed him - not only throughout the length of the shoot but in the eyes of the world, before and after - you realise how outstanding he is. It's a powerful display of commitment and it's probably one of the bravest and boldest moves that an actor has done. As entertainment, though, it's questionable. It goes on too long and there are points where the voyeurism pushes boundaries and comes across as bad taste. What could have been the downfall of a man going through a serious mental breakdown, struggles to decide whether it's comedic or dramatic. That being said, it's interesting viewing and it at least exposes the bitter behaviour of western media and how easily they can turn. Being a fan of Phoenix, will certainly add to the appeal of this film, but if you can normally take or leave him, then this won't hold much of an interest. It's flawed, but it's a bold and noteworthy experiment all the same. Mark Walker

A few years ago Joaquin Phoenix announced he was retiring from acting to pursue a hip hop career. Was it a hoax, or was it the real deal? Well, Casey Afffleck filmed the entire thing for this "documentary". I was very intrigued to see this, because I think Phoenix is a terrific actor. After watching this, I must say, I don't give a crap if this whole thing was real or not(never says). This movie is boring, all over the place, and doesn't go anywhere. I really hope it was a hoax, because if not, Phoenix is a messed up dude, but more importantly he's a jerk. He comes off very bad in this, and makes me like him less. If it was all fake, then man he is a great actor, but this is the type of movie that just makes you like the people involved a little less. I know he is coming back to acting, and I'm sure he will still be good, but as far as this movie goes, just skip it. This isn't worth the time or effort to watch a movie.

Joaquin Phoenix: Did someone just human shit on me?  I think everyone is over thinking I'm Still Here. It's a mocumentary and a damn good one at that. Phoenix wasn't just acting in a movie, but acting in front of the whole world. The David Letterman interview is absolutely hilarious and Phoenix makes it so believable. You have to give Letterman some credit for going with it though. I can't believe he was able to make it through that interview.  I'm Still Here is hoax documentary about Joaquin Phoenix quitting acting and trying to pursue a rap career. Phoenix's performance is off the charts. He kills his performance and really sells the hoax that all this stuff is really going on. He embarrassed himself in front of the whole world just to make this mocumentary. How awesome is that? He faked having a complete mental breakdown. I think it's absolutely brilliant. Besides the Letterman part of the movie; the next best scene is when he gets into a verbal argument with an audience member at his show. It is simply hysterical. It really is kind of irritating how bad the response has been to this film. It's a mocumentary, but a believable one. It's awkward. It's funny. I guess Casey Affleck almost went broke trying to make this movie and had to actually stop filming it in order to be in The Killer Inside Me, so he could finish the film.  Just go into it knowing it's a mocumentary and view it as a work of fiction. It's incredibly funny if viewed that way.