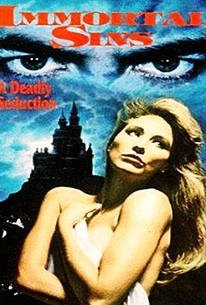 This sex-horror film from producer Roger Corman was filmed in Spain with a mostly American cast. Cliff De Young (Shock Treatment) is Michael, the heir to a cursed castle, who marries pretty Susan (Maryam d'Abo) and moves her in. Unfortunately for the newlyweds, an oversexed succubus named Diana (Shari Shattuck) is out to break up the couple. Director Herve Hachuel's film is mostly an excuse for Shattuck to be naked a lot, but undemanding genre devotees should find the film entertaining enough to watch on a rainy night.

There are no critic reviews yet for Immortal Sins. Keep checking Rotten Tomatoes for updates!

There are no featured reviews for Immortal Sins at this time.