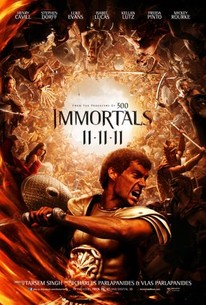 The brutal and bloodthirsty King Hyperion (Mickey Rourke) and his murderous Heraklion army are rampaging across Greece in search of the long lost Bow of Epirus. With the invincible Bow, the king will be able to overthrow the Gods of Olympus and become the undisputed master of his world. With ruthless efficiency, Hyperion and his legions destroy everything in their wake, and it seems nothing will stop the evil king's mission. As village after village is obliterated, a stonemason named Theseus (Henry Cavill) vows to avenge the death of his mother in one of Hyperion's raids. When Theseus meets the Sybelline Oracle, Phaedra (Freida Pinto), her disturbing visions of the young man's future convince her that he is the key to stopping the destruction. With her help, Theseus assembles a small band of followers and embraces his destiny in a final desperate battle for the future of humanity. -- (C) Relativity Media

Greg Bryk
as The Monk

It's handsome, but it looks as if the entire film was shot in a giant spray tanning booth. Kind of fun though.

Overall, Immortals is a pretty decent popcorn flick. Will it stand the test of time? Probably not, but the provocative special effects will leave a lasting impression on the audience.

Wearing its gigantic melodramatic emotions on its sleeve, this is Greek storytelling at its most robust and vibrant.

If you like blood and guts, with hand-to-hand (or should I say hand-to-spear) combat in video-game-style, you may like this more than I did.

The Greek myths, of course, will endure. The same cannot be said for Singh's silly, self-serious, instantly forgettable, and inaptly named Immortals.

Without any narrative heft, these sights don't last in the mind much longer than they linger on screen. And yet they thrill in short-lived bursts that Singh doles out carefully, keeping pace with the audience's appetite.

The film is fast-paced and the dialogue doesn't make your ears bleed... For incidental pleasures like these, I'm willing to forgive a swashbuckler a great deal of heterodox stupidity.

The film is likely to have more than a few detractors, but those who go into the theater knowing what to expect will find a lot to like in Immortals - and find themselves in the passenger seat for one heck of a ride.

While this may be one instance where Singh's art outweighs his story, it sure does look good doing it and I enjoyed almost every minute of it.

A decade later, Immortals still feels sublime. This particular kind of auteurist exercise so triumphs in executing its mad vision that it stands as something of a gold standard for other visual stylists.

Find the biggest screen, crank the stereo up loud, and revel.

Singh's aesthetic makes for one of the most intriguing applications of 3D in this new era of the format.

Visually stunning, but not the best storytelling.

"Immortals was OK. I enjoyed the action and the blood and gore. But the story was lacking for me. It is visually nice and there are a lot of great action scenes. But I was a little bored. I just didn't care about what happened. The acting was OK. I really like Luke Evans. I wanted to see more of him. I liked John Hurt in this as well. It didn't impress me. The film is worth seeing at least once."

A decent sword & sandals film. Generally more like 300 than Clash of the Titans thankfully. From the same producers I believe as 300 and it has a very similar CGI visual style to it. A nice twist to some of the Greek mythology in the story. The fight scenes are well choreographed and the SFX are very good. Add to that Mickey Rourke giving a good performance as the chief villain and you have a very good film.

My type of movie! BUT, I watched this movie with jaded eyes, expecting it to be more hype than substance. I was pleasantly surprised. To my amusement, I found myself gripping the arms of my chair more than once in the epic battle scenes. The special effects were solid, the dialogue better than average, and well acted by newer and veteran actors alike. Very well done, compelling storyline, marvelous combat moves, not overly gory...good movie!