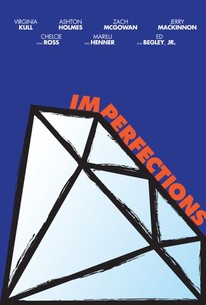 Cassidy Harper (Virginia Kull) is a struggling actress sleeping on her mother's couch (Marilu Henner) and grinding out auditions, fearing that any chance at stardom may have already passed her by. Desperate to save enough money to move to Hollywood, she takes a job working as a runner for her mother's boyfriend (Ed Begley, Jr.), an importer in Chicago's diamond district. When she realizes the money is trickling in too slowly for her to put a stake together, she conspires with the owner's son (Ashton Holmes) to stage a robbery and keep the diamonds--using her former boyfriend (Zach McGowan) as the fall guy. Their hare-brained scheme only gets more complicated when she realizes she's still in love with her volatile ex.

The title "Imperfections" doesn't lie: Viewers of David Singer's microbudgeted directorial debut will have to endure plenty of baggy scenes and awkward exchanges to enjoy the upside of this modest con movie ...

Plot-wise, it's a workable set-up, but, in his feature film debut, Broadway composer Singer ... seems to have no interest in adhering to traditional crime caper rhythms that put a premium on crisp pacing and creeping peril.

While Imperfections lives up to its name with its too clever by half plotline and failure to find a coherent tone, the indie film features enough enjoyable moments to overcome its flaws.

As a caper, it's a breezy hour and 43 minutes of well-done indie filmmaking.

There are no featured audience reviews yet. Click the link below to see what others say about Imperfections!