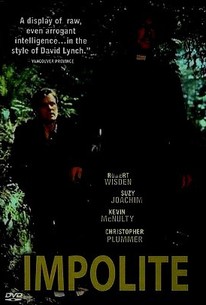 Directed by David Hauka, Impolite features Robert Wisden as Jack Yeats, a disgraced reporter eager to clear his name. When he receives an anonymous call about the death of a famous millionaire, as well as some crucial evidence in the case, he sets out to uncover the truth about the murder and to write the story of his career. Along the way he must elicit clues from both the millionaire's ex-wife and his sexy mistress, all while navigating the mysterious twists and characters involved in the case. The film also features Kevin McNulty, Stuart Margolin, and Christopher Plummer. ~ Tracie Cooper, Rovi

Gillian Barber
as Voice on the Phone

A fine line exists between the creative and the pointless.

There are no featured reviews for Impolite at this time.