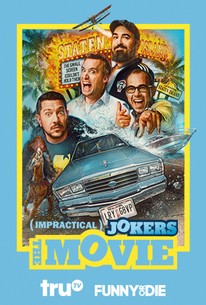 The film tells the story of a humiliating high school mishap from 1992 that sends the Impractical Jokers on the road, competing in hidden camera challenges for the chance to turn back the clock and redeem three of the four. The film stars The Tenderloins--Joe Gatto, James Murray, Brian Quinn and Sal Vulcano, and is produced by The Tenderloins, Chris Henchy and Funny or Die's Jim Ziegler.

I could watch the infamous McKay-helmed Ferrell short The Landlord on a loop for 93 minutes and laugh myself into hypoxia, as opposed to the nap Impractical Jokers left me craving.

An undistinguished and unnecessary extension of a brand whose primary attributes are likability, authenticity and relative modesty.

Impractical Jokers: The Movie never provides any good reason for its pranks to be packaged in a movie, but it does speak to the fruitfulness of its concept.

"Impractical Jokers: The Movie" is so thinly plotted that it makes screenwriting look like one of the group's impromptu challenges.

Fans of these four likeable doofuses... should enjoy the ride, though why somebody would get off the couch and spend money to see it is anyone's guess.

Ultimately, any movie that essentially starts with Paula Abdul (as Paula Abdul) clotheslining a guy and promising, "One day I'm gonna find you and I will destroy you!" - can't be all bad.

The movie is structured differently from "Jackass: The Movie," which was a hilarious array of pranks edited together. Instead, it strings the gags together between a fictional storyline, which doesn't work nearly as well.

Impractical Jokers: The Movie falls on its face when it steers away from the pranks, and it has the stars of the show reading scripted lines as actors portraying themselves.

Impractical Jokers: The Movie is a film that has unapologetically been made for fans of the TV show. While it is not likely to win over any new viewers, fans of the original TV series will have a great time here.

Will likely connect best with fans of the series and those absolutely desperate for self isolation entertainment.

It will make you laugh your cares away.

Probably won't win new fans, but it might entertain the loyal fans that have been following the series since the beginning...

There are no featured reviews for Impractical Jokers: The Movie at this time.