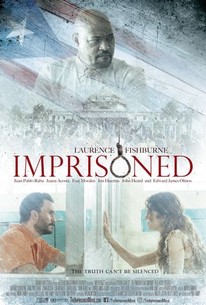 Dylan Burke (Juan Pablo Raba), attempts to move on from his former life as a criminal, with his true love, Maria (Juana Acosta). He soon realizes that his past will continue to haunt him, when he learns the new local prison warden, Daniel Calvin (Laurence Fishburne), has not forgiven him for an old crime. Calvin does everything in his power to make sure that Burke pays for his past mistakes, even going as far as to frame him for a murder he didn't commit, landing him back in jail. When the prison erupts into a riot, Burke and Calvin are each forced to make a choice between righteousness and revenge.

John Sipes
as The Jesuit

It's both flat and overheated.

"Imprisoned" doesn't claim it's based on a true story, but it also doesn't dissuade anyone from thinking that it might be.

Although certainly well-meaning in its condemnation of capital punishment, Imprisoned is too dully executed to achieve its desired impact.

Clumsy and meandering, Imprisoned seems unsure of whether it's a story of personal revenge, an outcry against a corrupt regime, or a study of the Puerto Rican justice system.

An earnest but uninspired attempt to tell a strong story about the Puerto Rican people, this prison/revenge drama comes across as a serious soap opera, flat and full of overly familiar elements.

The real sticking point of Imprisoned ... is how little it actually cares about capital punishment as anything more than a plot device.

Good intentions to highlight its setting's beauty and talent, aren't enough to save this unmemorable prison melodrama. [Full review in Spanish]

There are no featured reviews for Imprisoned at this time.