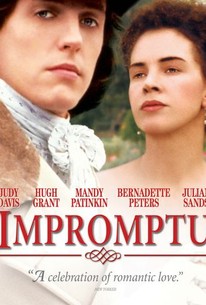 Judy Davis stars as French novelist George Sand in this romantic comedy, set among a loose-knit society of writers, artists and composers living in mid-19th century Europe. After converging on the country estate of the Duke and Duchess d'Antan (Anton Rogers and Emma Thompson), Sand and her friends--poet Alfred DeMussett (Mandy Patinkin), painter Eugene Delacroix (Ralph Brown), and composers Franz Liszt (Julian Sands) and Frederic Chopin (Hugh Grant)--spend their summer coping with romantic folly and enriching the tastes of their hosts.

Fiona Vincente
as Solange
View All

Anna Massey, who appears fleetingly as Sand's mother, offers a demonstration of how to make an overpoweringly fine impression in only a few minutes' time.

Despite all this assembled talent, the film stubbornly refuses to come to life.

A blissfully high-spirited romp about the circle of writers and musicians in 1830s Paris.

A disorganized, confusing but amusing biopic.

As a salon full of characters, Impromptu provides great fly on the wall fun.

Director James Lapine pushes the story to its entertaining fullest, exuding a period-costumed sense of fun.

Most of the hearty laughs are packed into the first half, but the more focused second part maintains interest as it cannily explores the topic of role reversals.

A rather conventional romantic comedy, with the requisite plot devices to provide obstacles for the would-be lovers, but the story is well told.

All the primary players are wonderful.

"Impromptu" is fun to watch. Even more impressive is that it is based on fact.

George Sand courts Chopin amid 19th Century social conventions including duels and the oppression of women. A lush costume drama with strong performances by Judy Davis and Mandy Patinkin, Impromptu has all the trappings of a Merchant/Ivory production. Its sly wit and subtle conflicts are always engaging, but what sets this film apart from some of the - for lack of a better word - boredom of Merchant/Ivory's work is the performance by Patinkin. Riding into a woman's bedroom on a horse, drunkenly shooting the officiant of a duel, and a garrulous braggart demeanor, Patinkin injects some energy to a film that desperately needs it. Davis's portrayal of George Sand is believable; no actress can capture Sand's masculine guise and still retain a strain of femininity like Davis. What bothers me about the film is how the story ends up reinforcing the gender conventions of the time. George Sand pursues Chopin in a hybrid of a masculine assertiveness, but her eventual victory comes with subverting her desires to what's required of a typical female in the 19th Century. Even the man, Chopin, rows the boat in the final montage of coupledom bliss. Overall, I liked Impromptu for Patinkin and Davis, but George Sand, a revolutionary feminist figure, deserved a better fate.

Suppose for a moment that the basis of all good art (or bad art for that matter ... let's just say Art) was the hot flush of Love's Sweet Call (or Lust for that matter). So then in Europe, in the early 19th Century, a famous collection of artists pursue one another with insane passion, their emotions the fuel for the works we know them by. Here's the unusual plot for a different romcom, a period piece about the rock stars of their day and there's not much to it more than rock has provided us: gender confusion and the usual romcom comedy of errors. There's good ideas here only not completely drawn out.

Just rewatched this film, after not having scene it in years and I have to say it still holds up very well. I really enjoyable romp with a cast that is to die for. Interesting character studies of some of the artistic greats of the period as well as a look and the strange realtionship between the aristocracy and the artist of the time. Not sure how historically accurate it is...but it is well written, excelently acted and very enjoyable to watch.