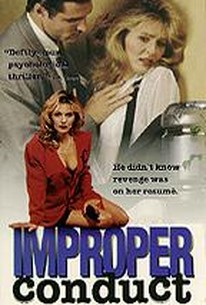 In this thriller, advertising agent Ashley is assaulted by co-worker Michael Miller. After charging him with sexual harassment and losing, Ashley kills herself. Ashley's sister decides to avenge her sister's death by ruining Michael. After seducing Michael and videotaping him making love to her, she begins blackmailing him.

Stephen Fiachi
as Mark
View All

There are no critic reviews yet for Improper Conduct. Keep checking Rotten Tomatoes for updates!

There are no featured reviews for Improper Conduct at this time.