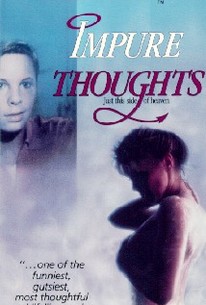 As this Catholic-oriented drama opens, a definition of purgatory is offered by Dame Judith Anderson and then four men are seen sitting in a drab, nondescript room. One (John Putch) is a soldier who died in Vietnam, and the others range from a businessman (Terry Beaver) to a husband and father (Brad Dourif). The four soon discover that they went to the same Catholic school together during the 1960s, and they trace their youthful careers. Mixed with jokes and ribbing about a Catholic school education, the memories of the four are alternately humorous or insightful, given their current situation.

Judith Anderson
as Narrator
View All

There are no critic reviews yet for Impure Thoughts. Keep checking Rotten Tomatoes for updates!

There are no featured reviews for Impure Thoughts at this time.