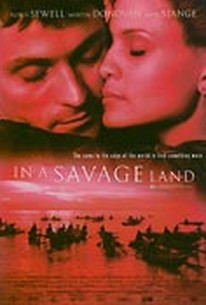 Australian director Bill Bennett sets this exploration of sexual politics and cultural differences against the stunning vistas of the Trobriand Islands. In it, two anthropologists travel to a remote island in the South Pacific to study its culture in the 1930s. Evelyn (Maya Stange) is an adventurous free thinker, while her husband Phillip (Martin Donovan) is a rigid scholar bound to convention and propriety. Tension develops between the couple when Phillip fails to acknowledge what Evelyn sees as obvious: that women run this lusty culture. Tensions are upped another notch when Evelyn falls for Mick (Rufus Sewell), a macho American pearl merchant. As Evelyn's life begins to crash in around her, the Japanese army invades her island paradise and tragedy strikes her priggish husband. In a Savage Land was screened at the 1999 Vancouver Film Festival. ~ Jonathan Crow, Rovi

Critic Reviews for In a Savage Land

There are no critic reviews yet for In a Savage Land. Keep checking Rotten Tomatoes for updates!

Audience Reviews for In a Savage Land

the setting is evocative of a paul bowles or w. somerset maughm story. perfect role for rufus sewell. i am a fan of martin donovan, but he isn't very charming in this role.

In a Savage Land Quotes