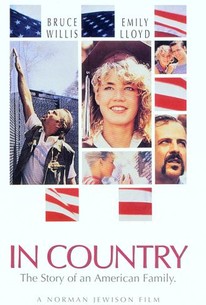 Critics Consensus: With a slow build to a dramatic conclusion, In Country benefits largely from its strong acting, particularly by Emily Lloyd in the lead role.

Critics Consensus: With a slow build to a dramatic conclusion, In Country benefits largely from its strong acting, particularly by Emily Lloyd in the lead role.

Critic Consensus: With a slow build to a dramatic conclusion, In Country benefits largely from its strong acting, particularly by Emily Lloyd in the lead role.

Norman Jewison directed this subdued character study of the effect of the Vietnam War on a small-town Kentucky family -- based on the novel by Bobbi Ann Mason. The film centers upon 17-year-old Samantha (Emily Lloyd) who lives in Hopewell, Kentucky with her Uncle Emmett (Bruce Willis), a quiet, laid-back veteran of Vietnam suffering from post-traumatic stress. Samantha's father was killed in Vietnam when he was 19-years-old (almost her age now), and her mother Irene (Joan Allen) has remarried. Samantha finds some old photographs of her father, and she becomes obsessed with finding out more about him. Irene, who has moved to Lexington with her second husband, wants Samantha to move in with them and go to college. But Samantha would rather stay with Uncle Emmett and try to find out more about her father. Her mother is no help, as she tells Samantha, "Honey, I married him four weeks before he left for the war. He was 19. I hardly even remember him." Finally Samantha, Emmett and her grandmother (Peggy Rea) go to visit the Vietnam Veterans Memorial in Washington. Finding her father's name in the memorial releases cathartic emotions in Samantha and her family.

Mike Smith
as Veteran at dance

Critic Reviews for In Country

There's a decency about this movie that's almost palpable. It's not trying to pump us up with false jingoism or the sins of the past. Jewison, a Canadian, probably approaches the entire subject with a mediatory mood.

In essence, In Country is a well-turned variation on the quest to find a father that shows up in the folk tales of almost any culture.

The scene at the memorial is one of the film's best, but director Jewison fails to find in it anything close to the level of emotional force that the same scene in Mason's book has.

This is no tribute to the war dead, but an unthinking betrayal of them -- they've been drafted again, this time to supply a climax to a second-rate tearjerker.

Norman Jewison usually is a commanding storyteller, but In Country is a film with two stories that fail to add up to something greater.

Filmmaker Norman Jewison does a nice job of establishing the small town (and its myriad of denizens) in which Lloyd's affable character resides...

Jewison manipulates the audience's familiarity with this national monument to achieve the kind of dramatic pitch that the characters themselves could not attain.

Unfortunately, the last half-hour slides into the weepiest sort of sentimentality.

Lloyd, though technically adept, doesn't really get under her conflicted character's skin; the supporting actors (including Willis) are the film's greatest strength.

Gripping performances save this post-Vietnam drama

A profoundly moving tearjerker about the festering wounds caused by the Vietnam War in middle America. A young Emily Lloyd is absolutely wonderful.

Audience Reviews for In Country

Not particularly good. Not the worst film, and to be honest, the last few minutes of this when they visit the Vietnam memorial are great. However, the rest of the movie feels really disjointed and confused. If the director was trying to do this deliberately to try and capture the characters' emotions, I would understand and appreciate it. But it's not done deliberately, it's just clumsy as hell. That being said, this is far from the worst war movie out there, it's just nothing special.