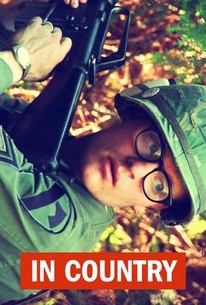 Synopsis: The idea of Civil War re-enactment is a familiar, even comical concept. But the men of Delta 2/5(R) recreate the battles of a far more charged conflict: The Vietnam War. For one weekend a year, the woods of Oregon transform as a mix of combat enthusiasts, Iraq veterans, and even a former South Vietnamese Army officer, revive - by choice - a war that a whole generation would much rather forget. Disquieting and provocative, In Country blurs fantasy with trauma, deftly tugging at the imposing question: what compels these men to don vintage uniforms and meticulously bring this controversial war back to life? (C) Bond/360

News & Interviews for In Country

View All In Country News

Critic Reviews for In Country

The movie earns its stripes only when Attie and O'Hara interview the weekend warriors and find their motivations to be more varied and legitimate than you might expect.

The world of In Country may sound like a joke to outsiders, and may well be a misguided hobby for some of its subjects. But the film suggests we'd make a big mistake to write it all off as foolish fantasy.

Are these re-enactors really as clueless as they seem, or is the portrait just incomplete? It's impossible to tell from this too-sparse film.

This is military reenactment not as entertainment but as a strange form of catharsis.

Attie and O'Hara do a wonderfully restrained, effective job of portraying the never-ending repetitive loop that is military life.

O'Hara and Attie never judge the players, letting their words and actions speak, though those actions are often intercut with footage from the real war.

At least In Country attempts an honest assessment of the various ways people respond to real and recreated combat. For some of them, war isn't always hell, or at least, other hells are worse.

Eileen Jones
In These Times

It's sometimes effective, sometimes manipulative, contrasting life and death with a man holding a card that spells out how he's supposed to look when he pretends to die.

Refreshingly non-judgmental and engaging on a visceral level, but low on insight and humanizing background info about its subjects.

In Country is as much an unabashedly humanist document as it is a fascinating and touching piece of nonfiction filmmaking.

There are no featured reviews for In Country at this time.