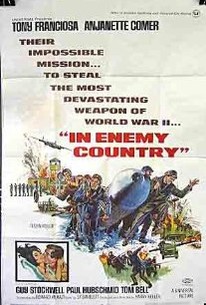 Occasionally listed as In Enemy Hands (evidently a working title), In Enemy Country is a war film with "A" ambitions and a TV-movie budget. Wartime secret agents Col. Charles Waslow-Carton (Tony Franciosa) and Lt. Col. Philip Braden (Guy Stockwell) infiltrate enemy lines, posing as POWs. Their mission is to destroy a deadly new type of torpedo, hidden in a Nazi stronghold in France. Their contact is Denise Marchois (Anjanette Comer), whom Waslow-Carton had coerced into marrying a German baron (Paul Hubschmid) before the outbreak of war, thus allowing her to continue her spying activities unimpeded. Upon the completion of their mission, Marchois chooses to remain behind with her husband, whom she has grown to love. Too many peripheral characters, way too many plot twists, and a "French" village obviously constructed on the Universal back lot: for these and other reasons, In Enemy Country is a must to avoid. ~ Hal Erickson, Rovi

Murray Matheson
as uncredited
View All

Critic Reviews for In Enemy Country

There are no critic reviews yet for In Enemy Country. Keep checking Rotten Tomatoes for updates!

There are no featured reviews for In Enemy Country at this time.