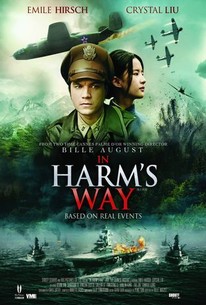 After the attack on Pearl Harbor damaged Americans' morale, FDR decided bomb Tokyo in retaliation, to raise the public's hopes. Bomber planes led by Lt. Col. Jimmy Doolittle successfully bombed Tokyo, but after completing their mission, ran out of fuel and were forced to bail out in occupied China. One young pilot, Jack Turner (Emile Hirsch, Into the Wild), is hidden from brutal Japanese forces by local villagers, including a widow named Ying (Crystal Liu, Disney's upcoming live-action remake of Mulan). With time running out, they take their one chance to make their break for safety.

A well-meaning, flat film which also feels somewhat unfinished - although there's not much in here to suggest that a further reworking is merited.

Although it means well, this emotional stakes in this bilingual World War II melodrama become lost in translation.

There are no featured audience reviews yet. Click the link below to see what others say about In Harm's Way (Feng huo fang fei)!