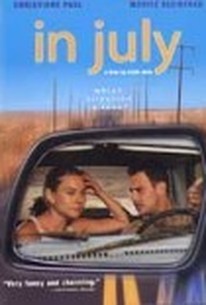 A man who has never been lucky in love thinks his fortune may have changed, only to find his life becoming all the more complicated in this nomadic romantic comedy. Daniel (Moritz Blebitreu) is a shy schoolteacher who is often unsure around women, but when he meets Melek (Idil Under), a beautiful Turkish woman, he falls head over heels in love and agrees to meet up with her in Istanbul. However, while en route from Hamburg, Daniel spots Juli (Christiane Paul), a woman he knows, trying to hitch a ride. Daniel picks her up, seemingly oblivious to the fact that she's long carried a torch for him; when Juli discovers why Daniel is making a long trip through Central Europe, she figures this could be her last chance to win him over. Her attempts to win his affections lead to a number of arguments, reconciliations, unintended turns, and brushes with the wrong side of the law. Im Juli was written and directed by Fatih Akin, who previously won acclaim for the drama Kurz und Schmerzlos. ~ Mark Deming, Rovi

The journey's the thing, and nearly every kilometer of it holds adventure, charm and laughter.

Instead of avoiding the genre's conventions, the effervescent German film revels in them, resulting in a picture so infectious it almost seems original.

A small but charming romance.

Who would have thought a German comedy could be light, charming and devoid of intellectual snobbery?

Bleibtreu's almost too-innocent shy guy works, and his wider familiarity will help sell the adventure, but it's his co-star who gives us the emotional mileage of the drive.

None of this is the least bit believable, but all is told with a light touch and good humor and the characters are quirky enough that you can't help enjoying the ride.

We've been to this place many times before, folks: An overly fastidious, brainy male gets led through a series of zany adventures by a free-spirited female, and the moral of the story is to not live life so cautiously.

Explodes with hope and good will, paying tribute to Georges Méliès and the persistence of cinematic magic along the way.

While it's true that this 2000 romantic comedy is basically a Teutonic riff on the 1985 John Cusack comedy The Sure Thing, In July still has just enough twists and turns and is just light enough on its feet to stand on its own.

[It has] such engaging characters [that] if Akin wasn't working overtime trying to get these kids together, viewers might get the urge to play matchmaker themselves.

Im July was the 3rd movie I saw from this Turkish German director,Fatih Akin. I must say the two other ones was bit depressing but Im July was fresh, funny and had some really delightful moments..The story was believable. Girl saw boy, boy saw girl, the girl had feelings for the boy, but the boy played hardball. So the girl looked for a way to show her love for him. Their whole journey through so many different countries and passing beside so many different people and cultures was really interesting.It was charming, with some fun twists, a great soundtrack, and terrific supporting characters. Made you forget some cliche and predictable moments.

If only things were that simple in real life.

Another great foreign film that I'd watch over (almost) any domestic film any day. Good performances, witty and quirky dialogue, and well-timed direction make this road-odyssey a must see