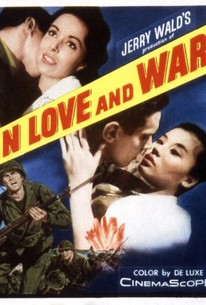 In this wartime drama, the effects of WW II upon three disparate Marines are chronicled. One is a coward who develops courage in the heat of battle and then falls in love. Another is a daring heroic sergeant who rushes off to the South Pacific after marrying his pregnant girlfriend. He is killed there. The third marine is an intellectual married to a socialite who commits suicide. He then gets involved with a Hawaiian nurse. During that relationship he begins to reassess the natures of love and war.

Frank Murphy
as Terrence
View All

Critic Reviews for In Love and War

There are no critic reviews yet for In Love and War. Keep checking Rotten Tomatoes for updates!

Audience Reviews for In Love and War

High grade soap opera/war movie with quality production values and a talented cast most of whom are underused since the film tries to tell to many stories at once. Still everyone performs well, looks beautiful and it's all told entertainingly.

In Love and War Quotes