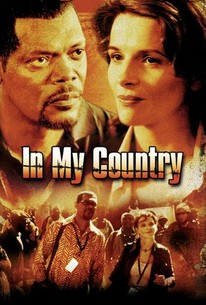 In My Country Photos

Langston Whitfield is a Washington Post journalist. His editor provocatively sends him to South Africa to cover the Truth and Reconciliation Commission hearings, in which the perpetrators of murder and torture on both sides during the Apartheid era are invited to come forward and confront their victims. Telling the unvarnished truth and expressing contrition may grant them granted amnesty. Can the deep wounds of Apartheid be healed through reconciliation? Langston is deeply skeptical. He tracks down Col. De Jager, the most notorious torturer in the SA Police and tries to penetrate the mind of a monster, an experience that obliges him to confront his own demons. Anna Malan, is an Afrikaans poet who is covering the hearings for radio. As a white South African she is shattered by the accounts of the cruelty and depravity committed by her fellow countrymen. Anna and Langston must both question their sense of identity. Where do they each belong? How responsible are they for what is done in the name of their respective countries? The moving testimony of the victims affects them deeply. In different ways they are both estranged from their families, and their shared experience draws them ever closer to each other. It is a story charting the unfathomable depths of human cruelty and the redeeming power of forgiveness and love.

Paul Dirkson
as One Man Band

John Langemann
as Afrikaner Next to Anna at Hearing

Nkuli Kgositsile
as Woman With Applications

News & Interviews for In My Country

View All In My Country News

Critic Reviews for In My Country

It shows what can go wrong when a good-intentioned filmmaker mixes historical tragedy with Hollywood banality.

There is great material here and ample food for thought, but the presentation is lacking.

Ostensibly about the aftermath of apartheid, but the pain of a people serves only as a backdrop for the most contrived of love stories.

Is it a docudrama about South Africa's post-apartheid Truth and Reconciliation Commission hearings? Or is it love story? The problem with In My Country is that it tries to be both.

Need[s] to be seen, as essential history and as demonstration of a form of social reckoning where compassion triumphs over passion, and the olive branch over the gun.

Better than its mangy reputation.

In spite of narrative missteps that negate the possibility of an empathetic protagonist, "In My Country" does viably introduce the African principle of "Ubuntu" whereby evil transgressions are absolved rather than revenged.

Points for trying and all, but this particular chapter of South Africa's history deserves a movie a bit more sincere -- and a lot less corny.

Intelligent piece that does its job as entertainment. More importantly, it should advance public knowledge about the apartheid government's human rights violations.

Audience Reviews for In My Country

This movie moved at a snails pace. Its a serious and sad subject, but the way it was presented made it seem secondary to the budding, uninteresting romance.

In My Country Quotes