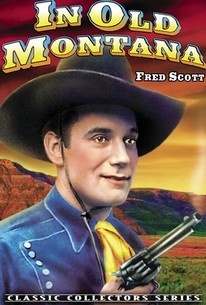 The war between cattle ranchers and sheepmen once again took center stage in this low-budget Western starring former opera baritone Fred Scott. Scott played Army Lieutenant Fred Dawson who upon learning that his father has been wounded heads for home disguised as a medicine show performer. He arrives just in time to prevent a range war, falling in love with sheepman's daughter Jean Carmen along the way. The war, as it turns out, was created by the greedy head of the local stockmen's association (Frank LaRue), who had been hoping to purchase enough cheap land to control the territory. In Old Montana was the second of four singing Westerns Scott made for producer C.C. Burr. Leading lady Jean Carmen, here playing a character amusingly named "June Allison," was a 1934 WAMPAS Baby Star who also acted under the name Julia Thayer.

Critic Reviews for In Old Montana

There are no critic reviews yet for In Old Montana. Keep checking Rotten Tomatoes for updates!

There are no featured reviews for In Old Montana at this time.