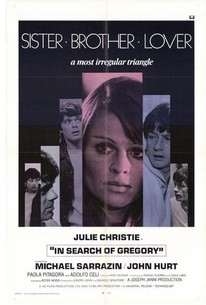 In Search of Gregory Photos

In this psychological drama, Catherine (Julie Christie) is an attractive young woman living in Rome who is infatuated with a man named Gregory, whom she's never actually met. When her father informs her that he intends to remarry, Catherine is not interested in attending the wedding until she learns that Gregory will also be a guest. She flies to Geneva for the ceremony and imagines Gregory to be an athlete in an advertising poster she sees at the airport; she's lost in fantasies about him, even as her brother Daniel (John Hurt), with whom she once had an incestuous relationship, attempts to seduce her. While she misses meeting Gregory, she does run into the sports star from the poster (Michael Sarrazin); they soon repair to a hotel where they make love. However, Catherine discovers that his chiseled looks don't match his drab personality, and she soon leaves him behind. Before returning to Rome, Catherine makes a last attempt at finding Gregory, whom she's been told is also looking for her. ~ Mark Deming, Rovi

Adolfo Celi
as Max
View All

Critic Reviews for In Search of Gregory

There are no critic reviews yet for In Search of Gregory. Keep checking Rotten Tomatoes for updates!

Audience Reviews for In Search of Gregory

Strange meandering drama that doesn't really have a clear point but Julie elevates the material and she has rarely looked so beautiful. Breathtaking scenery as well but it's easy to see why this is obscure.

In Search of Gregory Quotes