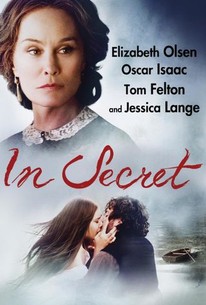 Critics Consensus: Although it benefits from a strong cast, In Secret's stars can't totally compensate for the movie's sodden pacing and overly familiar story.

Critics Consensus: Although it benefits from a strong cast, In Secret's stars can't totally compensate for the movie's sodden pacing and overly familiar story.

Critic Consensus: Although it benefits from a strong cast, In Secret's stars can't totally compensate for the movie's sodden pacing and overly familiar story.

Based on Émile Zola's scandalous novel, Thérèse Raquin, IN SECRET is a tale of obsessive love, adultery and revenge set in the lower depths of 1860s Paris. Therese (Elizabeth Olsen of "Martha Marcy May Marlene"), a sexually repressed beautiful young woman, is trapped into a loveless marriage to her sickly cousin, Camille (Tom Felton of the "Harry Potter" franchise), by her domineering aunt, Madame Raquin (two-time Academy Award winner Jessica Lange). Therese spends her days confined behind the counter of a small shop and her evenings watching Madame play dominos with an eclectic group. After she meets her husband's alluring childhood friend, Laurent (Oscar Isaac of "Inside Llewyn Davis"), she embarks on an illicit affair that leads to tragic consequences. (c) Roadside

Matt Lucas
as Olivier
View All

News & Interviews for In Secret

View All In Secret News

Critic Reviews for In Secret

Notable largely for the anguished, nuanced performance of Jessica Lange ...

The problem is that audiences are likely to become as fed up with the murderous lovers (Oscar Isaac, Elizabeth Olsen) as they become with each other.

Olson and Isaac are hot but what have you done to the story, Stratton?

The poison slips down easily enough, but it's diet cola when set against 2009's Korean vampire movie Thirst, still this book's most potent screen translation.

The movie-settish interiors and street exteriors are all painted grunge green or grunge grey: a one-coat Expressionism bordering on one-brush, broad-stroke miserablism.

A tonally indecisive film, which keeps changing its mind about major issues of remorse and ongoing motivation.

There's nothing secret about In Secret. It sizzles and satiates.

All filler no thriller; a film which uses its fine cast to meander around tame scenes of lust before pulling back from either sustained darkness or levity...

While the elements aren't often as neatly assembled as they should be, I give In Secret credit, for it's surprisingly fun, as imperfect as it is.

Olsen is one of Hollywood's best young actresses. There is nothing she can't do. In the long run, it's the men who'll wish they'd done more to support her suffocating sense of loneliness here.

The film's most striking performance comes from Jessica Lange, evoking both distaste and sympathy as the heroine's overbearing mother-in-law.

Audience Reviews for In Secret

I don't generally like period pieces, but this was very well done. Incredibly dark story of a little orphaned girl who is married off to her guardians sickly and dopey son. Elizabeth Olsen and tom Felton are both outstanding. The sexual obsession between the girl and the family friend is compelling as you can just see it is going to turn bad and it sure does. Half way through, a plan is decided to dispose of the husband and then it's a fast unraveling for all involved from there. At 1 half hours it doesn't wear out its welcome either, as this genre often seems to.

Sexual repression in the 1860s is not a subject matter often discussed, but in Charlie Stratton's adaptation of Émile Zola's scandalous novel "Thérèse Raquin" (1867) titled "In Secret", this tale is given a shot of rejuvenation thanks to its young and aspiring cast. Elizabeth Olsen is enough reason to view any film these days, with an impressive control over her deliveries and a look that allows her into almost any role. The fact that she has just surfaced as a viable actress (seeing as her sisters were childhood actresses) is astonishing to me and leads me to believe her best performances lie ahead. Playing the title character, Thérèse, whose father drops her off with her aunt Madame Raquin (Academy Award nominated Jessica Lange) at a very young age. As they grow older, the assumption that Thérèse will marry her first cousin, Camille ("Harry Potter" star Tom Felton) grows stronger, but his sickness and general lack of interest in the female sex leaves Thérèse wanting more, a hyper-sexual type that is found masturbating in a field to a shirtless man early on in the film. When they move to the city and meet Camille's childhood friend, Laurent ("Inside Llewyn Davis" lead Oscar Isaac), Thérèse's sexuality blossoms, pining for the suave artist whose words alone carry her to the brink of orgasm. As one would expect, an affair transpires, eventually leading to the question of what happens next. Does Thérèse remain in a loveless, sexless marriage with Camille? Or does she run away with Laurent? What transpires is along the lines of a Shakespearean tragedy, with everyone playing the roles perfectly. Olsen and Isaac have great chemistry, even after their characters shift into darker versions of themselves. Felton continues to play an excellent villainous character while Lange plays the overbearing mother with a fervor she was made for. Clad with spot-on period set design and costumes, the setting looks to step out of a Charles Dickens novel, playing rich and dark on-screen. Continuing the sexual presence in period films following recent releases like "Hysteria", "A Royal Affair", and "A Dangerous Method", there is something so satisfying about seeing these otherwise dignified people from the past experience the same emotional and stimulating responses that occur in this day and age, with little to no change apart from the fallout that happens afterward.